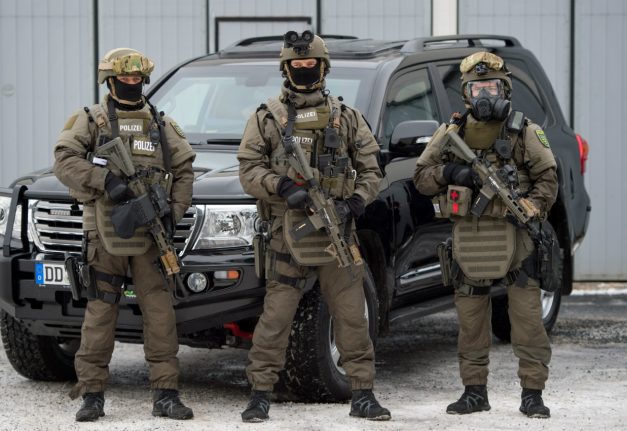 According to the police report on the raid, SEK special police forced their way into an apartment in Gifhorn and overpowered its 41-year-old occupant. The no doubt stunned man gave himself up without a fight.

The raid came after police became aware of a Facebook profile with “clear references” to the Isis terror group.

On the profile page, they also found a picture of a man holding a pistol.

After carefully analyzing the contents of the page, investigators decided that the person to whom it belonged “could probably plan an attack in the near future.”

Luckily the profile also contained telephone number, which investigators identified as belonging to the unfortunate 41-year-old from Gifhorn.

Jumping into action, police applied for a search warrant with the relevant court in Hildesheim. The judge agreed that the evidence merited a raid.

The officer in charge of the case suspected that the man could be in possession of a lethal weapon and deemed the operation of sufficient danger for the special forces to be handed the task.

When everything was in place, the elite cops burst into the home at around 1am.

But after a search of the apartment, they found no weapon or any other illegal instruments. After initial questioning, police also determined that the German detainee had no connection to Islam, let alone radical jihadism.

Broadcaster NDR reports that the Facebook profile had been created by another as-yet unidentified person. The reasons behind its creation remain unclear.

The suspect himself didn’t even have an internet connection in his house.

Germany has been on high alert due to terror attacks in recent years in major European cities, including the Berlin Christmas market attack in Berlin on December 19th.

Following the 2015 Paris attacks, police in Aachen had to apologize for arresting seven people who were later found to be completely unconnected to terror, after it was reported that one of them “looked very similar” to the main Paris suspect.