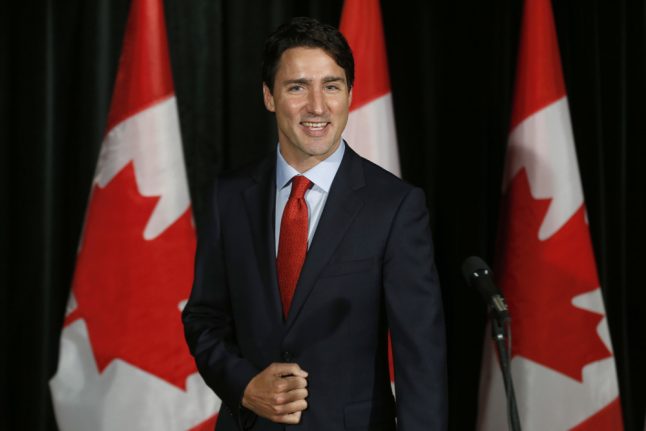 Trudeau will speak on February 16 before the European Parliament in Strasbourg to urge members to ratify a sweeping trade deal between the two sides.

He will then travel to Berlin, for talks with German Chancellor Angela Merkel, and to Hamburg, to take part in an annual banquet.

Trudeau, who will be the first sitting Canadian leader to address the European Parliament, will be vaunting a long-in-the-making deal known as the Comprehensive Economic and Trade Agreement (CETA).

The deal also requires ratification by EU member states, which could take years. It would eliminate 98 percent of tariffs between the two sides.

The visit comes at a particularly sensitive time for trade talks, with Britain poised to leave the European Union, new US President Donald Trump rejecting an Asia-Pacific trade deal and demanding renegotiation of a North American trade pact, and globalization seemingly out of favor with many Western publics.

But Trudeau said in a statement that “CETA sets a high standard for free trade agreements of the future.” He called it “the most progressive trade agreement ever negotiated by Canada or the European Union.”

Canada and China last year opened talks on a major trade accord, though those are expected to continue for years.

Trudeau's meeting with Merkel will focus on “key foreign policy and commercial priorities,” according to the prime minister's office.

Trudeau will then visit Hamburg, as guest of honor at its annual St. Matthew's Day celebration.

Canada last week named Stephane Dion, a former foreign affairs minister, as ambassador to both the EU and Germany, where Trudeau said he would play a “central role” in trans-Atlantic issues including trade.