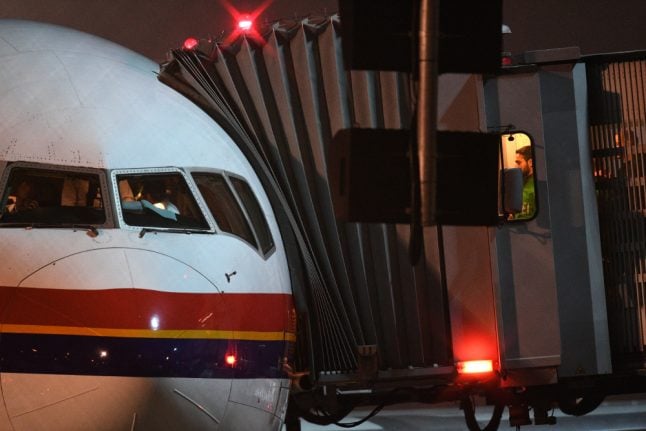 Refugees being deported to Afghanistan from Frankfurt airport. Photo: DPA.

Representatives of federal and state governments are set to discuss plans in Berlin proposed by Chancellor Angela Merkel on Thursday for speeding up deportations.

The plans include creating federal deportation centres for asylum seekers who have no chances of being granted protection in the country. The plan also would provide greater incentives for people to leave voluntarily, such as receiving more money the earlier they decide to go.

But human rights groups like Pro Asyl have criticized the plans.

“It is problematic because the Federal Office for Migration and Refugees (BAMF) will conduct expedited procedures in violation of standards,” Pro Asyl leader Günter Burkhardt told DPA.

Pro Asyl said that there are already many wrong decisions made when it comes to deportation orders. Burkhardt warned that refugees from Syria, Afghanistan, Eritrea and Iraq were particularly at risk should they be deported.

Police union GdP also said that the government should be careful in implementing new plans that might not even result in many people being deported.

“We should guard against sacrificing our values and legal concepts for the sake of policies that may only send away a few thousand people who don’t have chances of staying, and maybe only a few weeks faster,” said GdP chief Jörg Radek, adding that the rule of law is also important in an election year.

As Merkel seeks re-election in September, her government has been under pressure to speed up deportations, especially after it emerged that the main suspect behind the Berlin Christmas market attack should have been deported months earlier.

The leader of BAMF, meanwhile, has advocated for a more centralized asylum process, which involved both state and federal authorities.

“If various agencies are responsible, each step becomes a challenge for the whole process,” said BAMF leader Jutta Cordt to Handelsblatt.

If an asylum seeker is not granted protection or permission to stay, BAMF then issues a request for the person to leave Germany with a deportation notice. They are then given a certain amount of time to leave, depending on the reason for deportation. BAMF also notifies the country of origin and it then becomes the responsibility of the German state where the asylum applicant resides to enforce the deportation.

Interior Minister Thomas de Maizière called for an end to the back and forth of responsibility between federal and state authorities.

One aspect of the deportation debate that has been particularly controversial is sending people back to Afghanistan, where a recently released UN report shows conditions have worsened as civilian casualties rise. Germany has started a “collective deportation” programme of sending back groups to Afghanistan that have elicited protests.

Green party leader Cem Özdemir accused the federal government of deflecting unsolved problems with its deportation practices. Özdemir explained that the people who should be deported, namely those from Maghreb states, cannot be deported because there is no repatriation agreement with these countries.

“The problem has not been solved, so they deport people to Afghanistan.”

According to a report by Die Welt citing BAMF figures, there is an unequal distribution of rejected asylum seekers across the German states. Of the 207,484 designated as obliged to leave the country at the end of 2016, nearly 63,000 were in North Rhine-Westphalia alone. The next biggest group of around 16,500 people were in Bavaria.