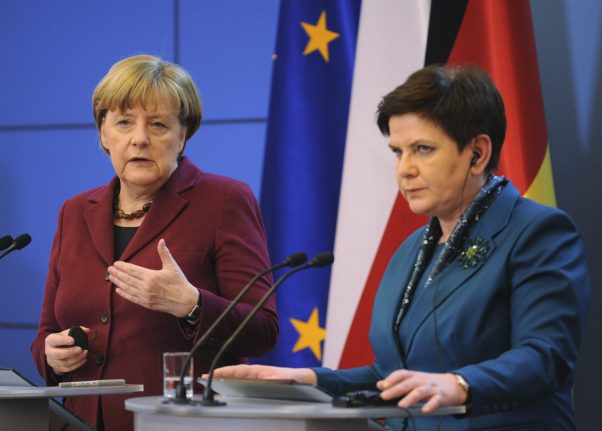 “As Germans and Europeans, good transatlantic relations based on our values are very much in our interest,” Merkel told reporters at a joint press conference in Warsaw with Polish Prime Minister Beata Szydlo.

The German leader also said that NATO members would meet to discuss the approach of new US President Donald Trump who has called the alliance “obsolete” in terms of fighting terrorism, but of “fundamental importance” to transatlantic security.

“What the president, the defence and foreign ministers have said about NATO is important and in the future we will have the opportunity to meet within NATO to discuss this,” Merkel said.

Germany and Poland on Tuesday vowed to cooperate in the interest of European unity.

The move signals a convergence of interests between Berlin and Warsaw as the EU faces a string of challenges this year including Brexit and several high-stakes national elections where populist parties with anti-EU agendas could make inroads.

Ties between EU powerhouse Germany and Poland – the bloc's largest eastern economy – cooled over the last year as Warsaw's right-wing Law and Justice (PiS) government pushed through a string of reforms that triggered an EU threat of sanctions over rule of law violations.

“We have similar ideas about the internal market, about an energy union, or issues tied to joint efforts in the area of defence and border security,” Merkel said alongside Szydlo.

“There maybe also certain ideas that go in the direction of treaty changes.

In this area, I believe we should be careful,” Merkel said, adding EU members must decide whether they have “a common goal or if each country has its own.”

“I'm certain that good partnership between Poland and Germany is necessary for the European project to succeed,” Poland's Szydlo said.

“Poland and Germany are two countries in the EU which have a huge role to play given the changes that are taking place in it,” she added.

Merkel said last week that European leaders may commit to a union of “different speeds” when they make a major declaration on its future at a summit in Rome next month.

The EU has long been riven by debate about whether all countries must commit to full integration including the single currency, or whether some can go at different paces.

The 27 leaders minus Britain are due to make a declaration at a summit in Rome in March marking the 60th anniversary of the EU, in which they will set out a post-Brexit roadmap.