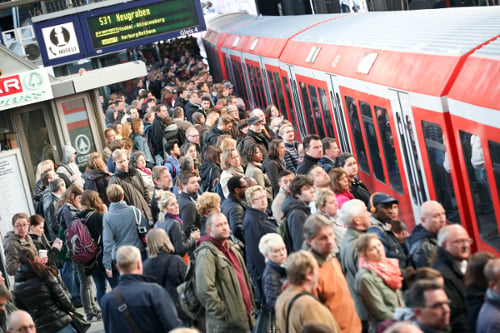 When Dorothy Ong stepped off the plane in Frankfurt last Sunday, following a 16-hour plane journey from Singapore, she thought the hardest part was over. A resident in Germany since last year, Ong has always found the German train service Deutsche Bahn (DB) efficient and punctual.

However, on this occasion she would end up “utterly shocked and dismayed” about her “agonizing experience”. And she wouldn’t be alone.

By Wednesday afternoon, normal service had been resumed on some lines, including coming in and out of Frankfurt. But other routes face ongoing disruption.

Ong, 29, was one of the first passengers affected. On a train heading north from Frankfurt to her home in Gießen, she and her husband found themselves having to wait for an hour at the small town of Nieder-Wöllstadt before the train suddenly drove back to Frankfurt.

Ong states that no information was given about alternative travel, and that she only found out what was going on when one of her fellow passengers translated the driver’s announcements.

What's more, there were no staff on hand when the train pulled into Frankfurt, creating huge queues in front of the information desk. Ong says her request for a bus to Butzbach, from where trains were running, was turned down. Instead buses were offered from Nieder-Wöllstadt – from where they had just come.

On arriving again in Nieder-Wöllstadt, Ong reports that there were no staff on hand to direct the swelling crowds. Hundreds of people spilled out onto the streets around the tiny station. Ong described the contingency planning as “disastrous”, as dozens of people ran for the substitute buses in what she termed a “survival of the fittest” struggle.

“Every 15 minutes or so, trains pulled into Nieder Wöllstadt and the place got more crowded,” Ong told The Local.

“It was truly like a war zone where people took things into their hands.”

Ong described how her husband was passing her luggage into the bus, with one foot inside and one on the pavement, when the bus driver drove off, causing passengers and onlookers alike to shout out in warning.

Frustrated, and with several suitcases, the Ongs ended up sharing a taxi with two other travellers, at a cost of €100. She had asked in Frankfurt about refunds, but had been informed taxis were only covered between midnight and 5am.

Although she had spoken with the manager, the only information about refunds supplied to Ong was a form in German.

When The Local enquired to DB about the case, we were referred to an online refund process, with English translations.

In response, a spokesperson for DB apologized for “any difficulties”, adding that the fact that the events took place on a Sunday afternoon was responsible for the delay in response times. But the spokesperson said that they had “not been made aware of any complaints about chaotic circumstances”.

But local news including broadcaster Hessischer Rundfunk described “chaotic conditions” this week due to the problem in Friedberg.

“People are really angry,” a spokesperson for a bus company that has been transporting passengers told the Frankfurter Neue Presse on Tuesday.
“The buses are so full that guests can’t get on any more.”

And users on a local newspaper's Facebook page also complained of “chaos” and a “total catastrophe”, suggesting Ong’s experiences were not unique.

By Wednesday engineers had partially fixed the issue.

Passengers will be hopeful that normal service is supposed to gradually be resumed this week. From Thursday on, many IC and RE train lines are supposed to be running again regularly. Travellers looking for further information can check for the most recent updates here.

Ong, meanwhile, is hoping her next trip will be less eventful.