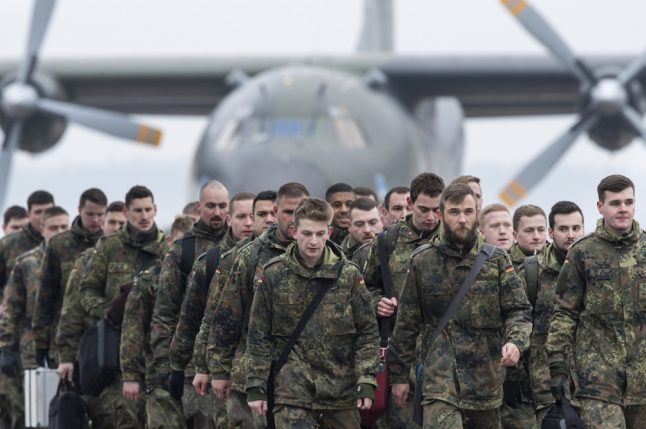 The battalion is one of four NATO is providing on a rotational basis to Lithuania and three other countries in light of a newly aggressive Russia.

The German troops will head up a force including Belgian, Dutch and French soldiers, among other nations, that will reach full strength of some 1,200 members this spring.

The unprecedented allied presence in Lithuania “significantly strengthens NATO's deterrence posture” during “an ongoing military buildup around our borders and aggressive actions in our region”, Lithuania's President Dalia Grybauskaite said at the Rukla military base, northwest of Vilnius.

Germany's Defence Minister Ursula von der Leyen, also at the base to welcome the troops, said “It sends a clear and important message to all: NATO stands strong and united”.

Three similar NATO units, led by the US, Canada and Britain, will be deployed this year in Poland Latvia and Estonia.

The countries requested the troops after Russia's 2014 annexation of Crimea from Ukraine.

The Kremlin has denied any territorial ambitions and claims that NATO is trying to encircle Russia.

But Moscow's deployment last year of nuclear-capable Iskander missiles into its heavily militarized Kaliningrad exclave, which borders Lithuania and Poland, and frequent Russian military drills in the region have rattled nearby NATO states.

Lithuania has said it will build a fence on the border with Kaliningrad to counter smuggling and hybrid warfare threats, in particular the entry of unmarked Russian military personnel into NATO territory.

Kestutis Girnius, who teaches at the Institute of International Relations and Political Science in Vilnius, told AFP that by “placing their own soldiers in the line of fire, NATO countries have given tangible proof of their
commitment to Lithuania's security”.

In recent years, Lithuania has purchased about half a billion euros' worth of German-made armoured vehicles, artillery and military trucks.