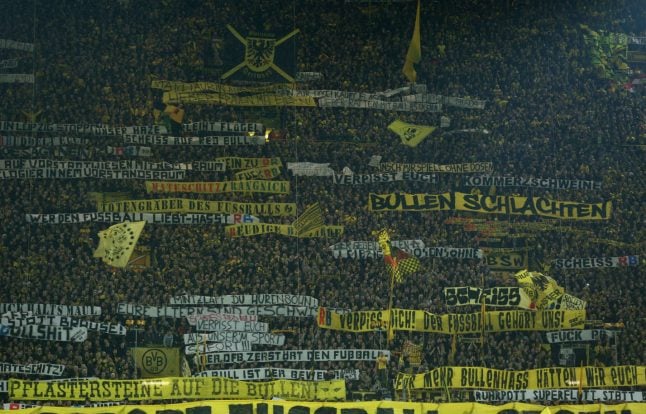 Fans during the match between Dortmund and Leipzig hold inciting banners. Photo: DPA

According to the police report from Saturday's clash between Dortmund and RB Leipzig, fans of Dortmund threw stones, bottles and cans at opposition fans, including at women, children and families.

Fans of Leipzig, who lie two places above Dortmund in the Bundesliga table in second, reported that there was no security in place outside the stadium and that Dortmund fans attacked and beat them as they got out of the buses, before stealing their tickets.

A total of ten people were injured in the violence, six of whom were Leipzig fans. The other four were police officers.

Inside the stadium meanwhile, the south stand was filled with banners with messages such as “slaughter the cops” and “paving stones against cops”.

Also on view were slogans against RB Leipzig, including on which read “whoever loves football hates RB Leipzig.”

Several of the banners could be in violation of German laws on hate speech.

Leipzig only gained promotion this season and are owned by energy drink company Red Bull. They are deeply unpopular with fans of other clubs due to their perceived defiance of rules which state that members have majority voting rights at a club.

On Saturday evening, 11 men, all from the Dortmund ultra scene, were arrested, but were later released.

“I’m hoping for a quick and hard reaction from the justice system so that everyone knows what faces them when they act like this,” Interior Minister Thomas de Maizière told Bild on Monday.

He added that those behind the violence “deserve to be under lock and key, they don’t deserve to be in a football stadium.”

Ralf Jäger, interior minister of North Rhine-Westphalia said that what happened on Saturday before the game in Dortmund “shamed football”.

“Whoever throws stones and bottles at women and children is out of control and needs to be punished,” Jäger said.

“I’m completely shocked – I’ve never seen images like these of such hate-filled faces in all my days as a police officer,” said Edzard Freyhoff, the police officer in charge at the stadium.

Borussia Dortmund now face a heavy fine from the German Football Association and the possibility of playing a home game behind closed doors.