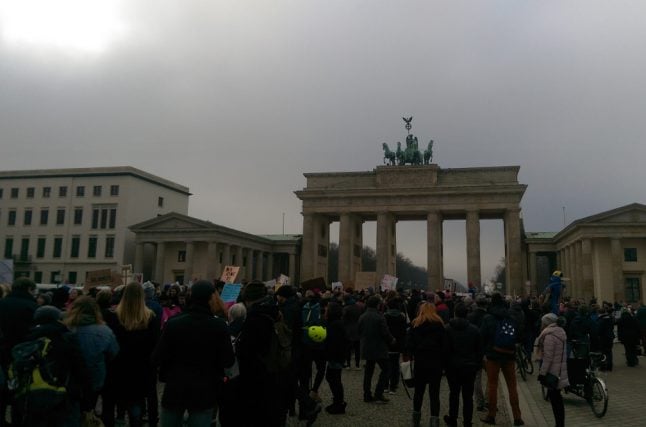 Police told German media that an estimated 1,200 people gathered before the iconic Brandenburg Gate on Saturday afternoon in near freezing temperatures for the anti-Trump demonstration.

“We passed the Berlin Wall twice on our way here,” German Max Kersting told The Local. “To me it feels like a city where we had borders that turned out to be bad for everyone, so it makes sense to show up to protest new borders and nationalism.”

A group called The Coalition organized the event, and similar rallies were held around other European cities like Paris and London. The demonstration mainly took aim at Trump’s plan to build a wall on the US border with Mexico, as well as the travel bans implemented last week.

The US Department of State on Friday and Saturday said it had suspended all actions to implement the ban due to a judge’s ruling on Friday.

Trump continued to defend the order on Twitter on Saturday, emphasizing that it was meant to protect “safety and security” in the US. He also blasted the judge’s ruling as “ridiculous” and said it would be overturned.

“We must keep the ‘evil’ out of our country,” he wrote in one tweet.

We must keep “evil” out of our country!

“When a country is no longer able to say who can, and who cannot, come in and out, especially for reasons of safety and security – big trouble,” he wrote in another.

When a country is no longer able to say who can, and who cannot , come in & out, especially for reasons of safety &.security – big trouble!

When Trump first signed the order, it raised alarm in Germany where more than 130,000 citizens also have passports from one of the seven listed Muslim-majority countries. It was also met with criticism from across the political spectrum of German politicians, reflected in the sentiments of the crowd gathered in Berlin on Saturday.

'I felt like I was less worthy than others'

One Iranian woman attending the protest, Mahsa Zamani, told The Local she had been living in Germany for more than six years, studying medicine in Berlin. Zamani was supposed to move to the state of Florida to do required hospital training, along with her German boyfriend, and already had a confirmed placement with a hospital as well as plane tickets and a place to live.

Getting a visa meant going through medical checks, and flying to Munich for an intense interview process. But then Trump signed the executive order and it left her plans in limbo.

“Everything was just perfect and we were getting ready for our semester exams,” Zamani said. “One day I woke up and saw that all my friends had sent me messages and asked if I could get my money back because they knew how hard I had worked and how much I wanted this opportunity. I was so shocked.

“I see myself as an educated, open-minded and free person. In this moment I felt nothing but so much discrimination. I automatically felt like I was less worthy than others. My boyfriend said he would not do the internship himself to support me, but that hurts too – because of this discrimination, he had to give up this chance.”

The new court ruling and State Department's suspension of the order still leaves Zamani with great uncertainty because Trump has said things will soon change. Her flight is set for February 19th.

“If it stays stable and I am allowed to go, I won't let Trump ruin my life,” Zamani said.

After various organizers spoke before the Brandenburg Gate, the demonstration marched marched the rally to a position across the street from the nearby US Embassy, overlooking the Holocaust memorial.

“Germany is suddenly now the leader of the free world and dealing with a partner that’s acting nuts,” said American retiree David Quick, who once worked in Washington in public relations for a US government department and now volunteers teaching German to refugees in Berlin.

“It’s sobering and grounding when living in Berlin and being surrounded by constant reminders of what happens when normal people start doing abnormal things to one another.”

The protest lasted a little less than two hours, attended by a diverse group of families and friends.

“I want to show that there are people in Berlin who are politically interested. It’s time to do something out on the streets, and not just online,” said Berliner Sebastian with his young daughter sitting on his shoulders.

“My little family is a mix of Egyptian, Polish and French roots as well… If we weren’t such a mix of people, my daughter wouldn’t be here.”

Syrian refugee, rapper and NGO worker Mohammad Abu Hajar, who came to Germany as a student before applying for asylum expressed optimism when speaking to The Local at the protest.

“I was not planning to go to the US… but [the ban] is only increasing the gap between cultures, and causing conflicts to escalate globally” he said.

“Every cloud has a silver lining. Trump is the cloud, we are the silver lining… Trump, you will make us stronger. We will be unified and we will fight back.”