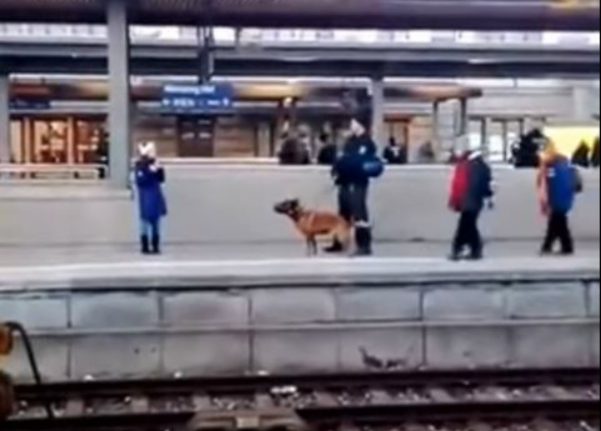 The video, which was uploaded to YouTube on Monday, shows the police dog barking furiously at a young child, as its handler struggles to control it.

The dog then jumps around and pushes a passing woman off the edge of the platform. Still barking furiously, the muzzled canine then lashes out at a further bystander.

Luckily for the woman, no train was approaching at the time, and she was able to make it back onto the platform with the help of a police officer and a member of the public who jumped down onto the tracks to help her.

According to Bild, the dog and its handler were on the platform to provide security after a football match between FC Nuremberg and Dynamo Dresden.

The person who shot the video told Bild: “I wanted to document the over-the-top behaviour of the police with my camera.”

A police spokesperson told Bild that the dog had been trained to defend its handler and had attacked the woman because she came too close.

The federal police are responsible for guarding German borders, airports and railways.

Earlier on Wednesday the federal police were forced to deny a claim by a Singaporean business woman that one of their officers had asked her to prove she could lactate at an airport security check.

At a security check officers grew suspicious of the woman when she was found to be travelling with a breast pump but without her baby. The 33-year-old told the BBC the experience had been traumatizing.