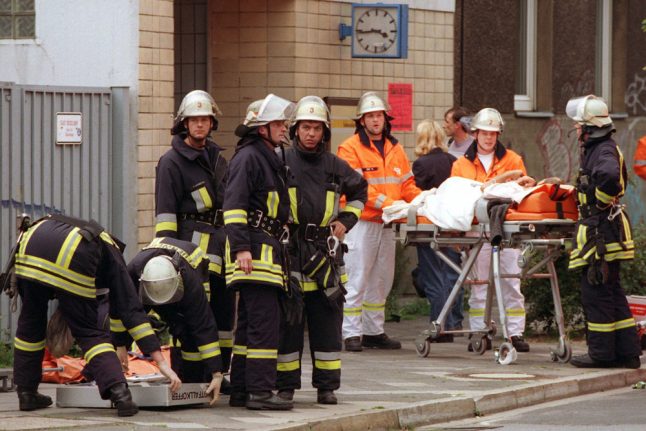 The aftermath of the 2000 Düsseldorf bombing. Photo: DPA.

The summer 2000 bombing at the Wehrhahn S-Bahn station left ten people injured, including some seriously. The victims were foreigners, and six of them were Jewish.

Spiegel Online first reported on Wednesday that police had arrested 50-year-old Ralf S., identified as a gun fanatic who had been a known member of the neo-Nazi scene at the time of the attack.

Investigators confirmed on Wednesday that Ralf S. was a right-wing radical who had run a military shop near the scene of the bombing.

On July 27th 2000, the suspect is believed to have hung a plastic bag on a railing at the S-Bahn station, which contained a TNT-filled pipe bomb. It detonated at about 3pm that afternoon, hitting seven women and three men, including students at a nearby language school.

One was a pregnant woman who lost her baby and had a leg amputated as a result, according to reports at the time. Six were Jewish immigrants from former Soviet Union countries, while the rest were Russian-Germans.

The attack sent shockwaves across Germany, especially because a neo-Nazi motive was suspected. A few months later, a synagogue in the western city was set on fire in an arson attack.

Spiegel reported that officials have now confirmed they are investigating it as a xenophobic attack.

Ralf S. is reportedly a former German soldier, who became known as the ‘sheriff’ in his part of town because he would patrol the streets with a dog, or dressed in combat gear.

He had appeared on investigators’ radar shortly after the attack, but despite hours of interrogation and a temporary detainment at the time, there was not enough evidence to charge him.

The arrest on Wednesday is due to new evidence gathered over the course of a two-year intensive investigation and surveillance of Ralf S. Investigators reviewed the damaged railing on which the bomb was hung, and also used improved DNA evaluation techniques.