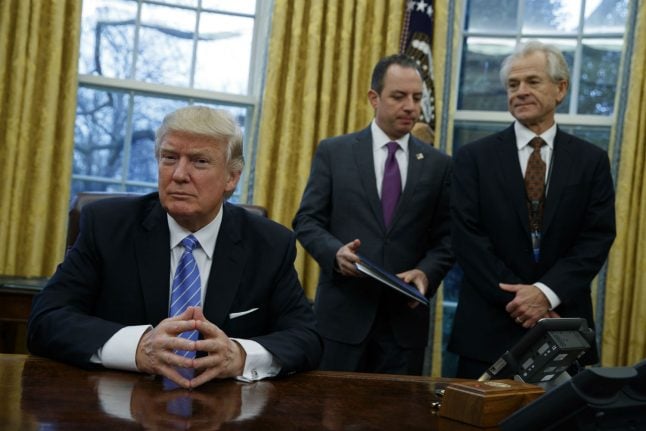 The public rebuke of a major trading partner is the latest example of the brash tactic that has become a feature of the new US administration, with Trump himself using public attacks and Twitter to criticize businesses and allies, including Mexico.

Peter Navarro, who advised Trump during the campaign and heads the White House's new National Trade Council, said in an interview with the FT that Germany “continues to exploit other countries in the EU as well as the US with an 'implicit Deutsche mark' that is grossly undervalued.”

Navarro, a hardliner on trade and especially China's rise, also said the planned trade deal between the United States and European Union – the Trans-Atlantic Trade and Investment Partnership – was dead.

He repeated Trump's statements that the administration will pursue bilateral agreements that favor the United States.

The criticism of Germany is not new as the country has large trade and current account surpluses, and the International Monetary Fund, for example, has repeatedly urged the country to increase spending to boost consumption and the sluggish economic growth in the EU.

Germany is an exporting powerhouse and gains a trade advantage by being part of the eurozone where the currency value is held down due to the weak economies in the union, like Greece, Spain and Italy, economists say. Were Germany to operate outside the currency union, the Deutsche mark value would be much higher, making the country's exports more expensive and less competitive.

However, it is highly unusual to conduct these discussions over policy differences in newspapers rather than behind closed doors.

Trump's repeated calls for Mexico to renegotiate the North American Free Trade Agreement and pay for a border wall on the southern US border prompted Mexican President Enrique Pena Nieto to abruptly cancel a planned visit to the White House.

German Chancellor Angela Merkel, speaking in Stockholm, deflected the criticism, saying the currency value is the responsibility of the European Central Bank.

“As far as the question of the euro and its assessment is concerned, Germany is a country that has always promoted the European Central Bank to make an independent policy, as did the Bundesbank when there was no euro,” Merkel said.

“Therefore we will have no influence over the choices made by the ECB. So I cannot either, in the situation as it is, and I do not want to change anything.”

There has been no comment so far from the ECB.

But France's Finance Minister Michel Sapin hit back saying, “The decisions of the new US administration pose a serious risk to the world trade order.”

He warned that “history reminds us that protectionist retreats are the worst of solutions,” and said neither France nor Europe “will be able to watch helplessly what might risk being a dislocation of our economic institutions.”

Navarro also reiterated that the Trump administration will focus on bringing manufacturing and production back to the US shores.

“It does the American economy no long-term good to only keep the big box factories where we are now assembling 'American' products that are composed primarily of foreign components,” he said in the FT.

“We need to manufacture those components in a robust domestic supply chain that will spur job and wage growth.”