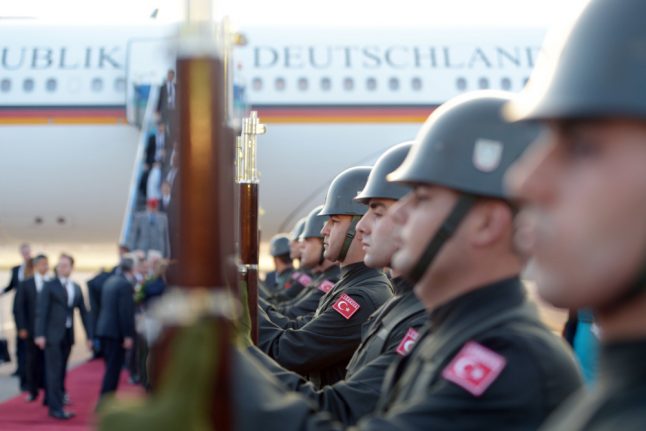 Turkish soldiers during a visit by German President Joachim Gauck in 2014. Photo: DPA.

“German courts and German authorities must assess this very carefully, and they must absolutely not accept their asylum requests,” said Isik.

In a video posted on the state-run news agency Anadolu's website, the minister added it was his “expectation” that Germany would not approve the applications.

The Turkish officers seeking asylum were quoted in German media as saying they feared jail and possibly torture back home.

Isik said they were accused of involvement in the July 15 attempted overthrow of President Recep Tayyip Erdogan.

He appeared to suggest any approval would have an impact on relations, which are already strained by Berlin's repeated expressions of concern over the magnitude of the post-coup crackdown.

“For a country like Germany that has very strong cultural, social and political relations with Turkey, it would be strictly unacceptable to give protection,” he said.

Merkel is due to come to Turkey on Thursday in what will be her first visit since the failed putsch.

Merkel is expected to discuss the refugee crisis as Turkey has been vital to European Union (EU) plans to stop the mass flow of migrants from the Middle East and Africa into the bloc, especially to Germany.

Some 43,000 people have been arrested on suspicion of having links to coup plotters.

One of the officers seeking asylum insisted he had no connection to the coup attempt or sympathy for those behind it, and was quoted as saying: “If I return to Turkey I risk imprisonment, or perhaps torture.”

Isik added that he would discuss the matter with his German counterpart at a NATO security conference next month.

Around three million Turkish-origin people live in Germany, the legacy of a massive “guest worker” programme in the 1960s and 1970s.