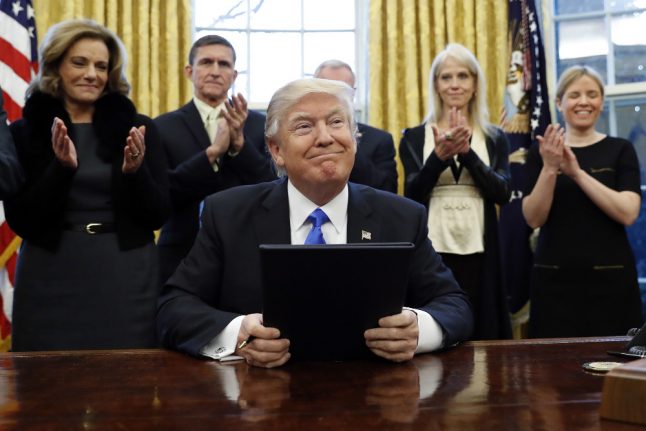 This impacts tens of thousands of German citizens who also hold, for example, Iranian passports – Iranian citizens cannot revoke their citizenship. The Green party told financial newspaper Handelsblatt that this would also impact the party’s vice chief of the German-American parliamentary group, Omid Nouripour, who holds both German and Iranian passports.

“If the USA does not immediately rescind this insane travel block for representative Omid Nouripour and other German citizens, then we should block Donald Trump’s trip to the G20 summit in Hamburg. It is not possible to have serious discussions under these circumstances,” Green party parliamentary spokesman Dieter Janecek told Handelsblatt at the weekend.

But Merkel has also condemned Trump’s travel blocks, saying it was “not justified” to target people based on their religion or background. Her strong words came a day after she spoke with Trump by phone on Saturday to discuss a range of topics from Russia to the NATO alliance.

Seibert said on Sunday that during the call, Merkel had reminded the US leader of his human rights obligations under the Geneva Refugee Convention.

Trump has been critical of Merkel’s immigration policies in the past, telling media before he took office that she had made a “catastrophic mistake” by allowing so many refugees into Germany.

Leader of Merkel's CSU sister party, Horst Seehofer, also criticized Trump's executive order. The Bavarian leader has generally been more welcoming of Trump's presidency than other German leaders, and his office had expressed optimism about working with the American billionaire to The Local on Trump's inauguration day.

“I do not find this to be the right decision,” Seehofer said on Monday after he had praised Trump's “speed” at fulfilling his campaign promises on Sunday to Bild.

But one of the founders of the far-right Alternative for Germany party (AfD), Alexander Gauland, praised Trump's policy.

“Trump did it right, he showed us how to do it,” Gauland said, adding that the travel bans were consistent and clever “because they increase the pressure on the countries to come to grips with their security and poverty problems, which is in the interest of both sides.”

Gauland said that Merkel should take the executive order to heart and if she did not, the “asylum and security problems in Germany” would increase.

New Foreign Minister Sigmar Gabriel wrote a joint statement on Sunday with his Dutch counterpart Bert Koenders, emphasizing the importance of fighting against terrorism, but stated that sweeping travel bans are not the right method.

“We believe that travel blocks against millions of people based on nationality, background and religion is never the right way to fight against terror,” the two ministers wrote, adding that they would be reviewing how the American policy would impact their own dual citizens.

German-Iranian actress and singer Jasmin Tabatabai called Trump’s immigration policy “deeply un-American” in an article for Bild on Monday, explaining that she was now concerned about how she would be able to visit her family in the United States.

“It is horrifying to imagine what else will happen to us,” Tabatabai wrote.

Trump's travel bans have met with widespread protests at airports in the US where travelers have been detained on their way into the country.