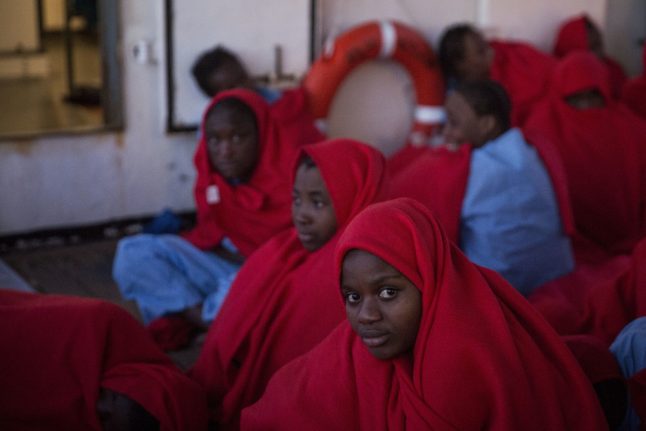 Refugees sitting on a boat off the coast of Libya. Photo: AP/DPA.

Foreign ministry spokesman Martin Schäfer on Monday did not confirm or deny the diplomatic cable, which had reportedly alleged regular killings, torture and rape in those camps in the highly unstable country.

“But, in general, of course it is correct to say that the human rights situation is catastrophic in Libya,” Schäfer said, adding that this was the case especially for illegal migrants, “the weakest of the weakest”.

Hundreds of thousands of West Africans were still heading through the Sahel zone and Sahara to the Mediterranean coast, bound for what they see as “their promised land Europe,” he said.

Some became victims of “the private prisons mentioned in some weekend press reports, where the human rights situation is indeed a disaster,” he said, with others reporting “terrible” experiences from Libya.

The report, said to be compiled by the German embassy in Niger, mentioned systematic “executions, torture and rape”. It also said smartphone pictures and video footage supported claims of “concentration-camp-like conditions in the so-called private prisons,” reported the newspaper Welt am Sonntag and news weekly Stern.

Merkel said in her weekly podcast on Saturday that the EU needed to take steps to stop the migrant flight, after more than 4,000 people drowned last year in the Mediterranean Sea, most of them en route from Libya to Italy.

Europe needed to work with the fragile government in Libya, she said, ruling out however for now a deal like the one the EU reached with Turkey early last year to stop migrant flows.

An agreement to repatriate rejected asylum seekers could only be reached when its government is in control of the whole country, Merkel said.

People smugglers have exploited the chaos gripping Libya since the 2011 uprising that overthrew dictator Moamer Kadhafi.

Libya was also among the mainly Muslim countries affected by US President Donald Trump's executive orders that on Friday barred refugees from entry for 120 days.

Smuggling is big business for gangs who cram migrants into boats that are small and unsafe for the perilous journey to Italy just 300 kilometres (190 miles) from Libya.

European countries are trying to curb the flow of illegal migrants and have boosted their support for the Libyan coastguard.

In the absence of an army or a regular police force in Libya, several militias act as coastguards but are often being accused of complicity or even involvement in the lucrative trade.