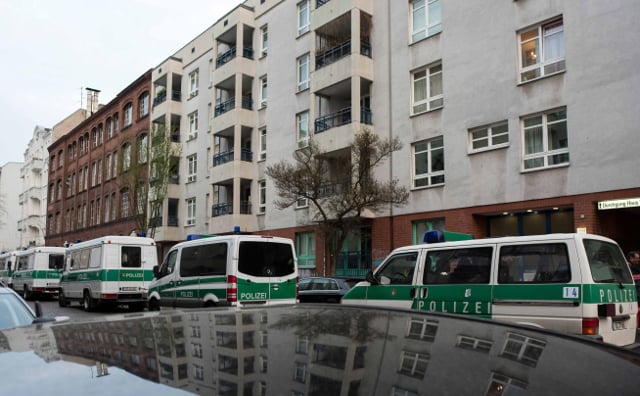 File photo of police cars in the Neukölln district: DPA

The cars were set alight at around 1.30am on Monday morning, in incidents which were about half an hour and three kilometres apart.

Investigations into the crimes are being handled by the department responsible for politically motivated crimes, police said in a statement.

One of the owners runs a bookshop which had been targeted in December in another apparently political attack.

After holding an event with the title 'How to tackle the AFD? Standing up to racism', the shop's windows were smashed with stones.

The owner, Heinz Ostermann, is part of the group 'Neukölln bookstores against righ-twing populism and racism', but his shop is not a specifically left-wing or political bookshop. In contrast to the previous attack, the car-burning took place outside his home.

The other car set on fire on Monday night also belonged to an activist opposed to far-right groups.

“It was no accident,” Fendt told the Tagesspiegel. At the events, he says neo-Nazis reportedly photographed both Fendt and his Ford car, which has an IG-Metall sticker in the rear window.

In fact, there have been several cases of vandalism against prominent left-wingers since mid-December, including when a banner of the Rudow Evangelical Church, which campaigns against racism, was destroyed.

Just over a week ago, unknown vandals set alight the car of SPD politician Mirjam Blumenthal, a prominent local campaigner against extremism.

“These targeted attacks are attempts at intimidation and a direct attack on our democracy,” SPD Berlin mayor Michael Muller told the Berliner Morgenpost at the time.

Various neo-Nazi groups have reportedly published the addresses of businesses and meeting points judged to be associated with left-wingers online, while left-wing extremists have taken the same approach with the addresses of right-wingers.

After the adresses of NPD member Sebastian Thom and the local AfD chairman were published online, unknown criminals vandalized each of their houses with graffiti calling the politicians Nazis.

Germany has seen an increase in violent extremism on both the left and the right in recent years.

The upturn in violence seems to have corresponded with the refugee crisis, with those on the far-right attacking refugee homes, for example, and far-left groups retaliating, often attacking far-right activists or police.