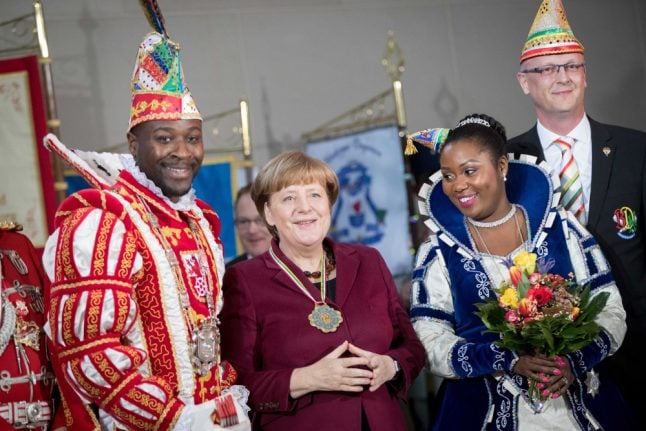 Chancellor Angela Merkel held a reception on Monday at the Chancellery to celebrate the “royal couples” chosen in each state for the Karneval season next month.

Merkel welcomed Karneval’s traditional critical and satirical eye towards politicians, calling it refreshing, and also warned in general about propaganda campaigns of fake news being emphasized over facts.

“They like to satirize us politicians. That is a part of the occupational hazards of my field. But I can live with it – very well,” Merkel said.

She added that Karneval satirists bring political parties into high spirits and tear people away from their daily grind “in a world that is more complicated than we would wish”.

“One can laugh about things that are otherwise meant for crying.”

And while US President Donald Trump has drummed up debate about “alternative facts” after a dispute about the size of the crowd at his inauguration, Merkel made a plea for sticking to the truth.

“There needs to be an understanding of persuading people with facts instead of fakes,” Merkel said, speaking generally.

“We all know the word post-factual… It means how we think about a topic is more about the emotion and less about the situation. But when the mood counts more than the facts, then – at least – in politics we are getting into a crisis of reasoning.”

The Berliner Morgenpost called her statements a “small, indirect greeting across the Atlantic”.

“One may well interpret Merkel’s comments as a verbal dig at Washington,” the newspaper wrote.

Trump claimed on Saturday that he saw “a million, a million and a half people” in the crowd, but photos comparing Barack Obama's first inauguration in 2009 – attended by an estimated 1.8 million people – showed Trump's crowd to be vastly smaller, and crowd experts have estimated the size to be around 160,000 people.

A top aide to Trump later described his team’s depiction of the inauguration as “alternative facts”.

After discussing fiction versus fact, Merkel said on Monday that hosting the “royal couples” each year was a special highlight.

“We actually don’t have guests as colourful or as fun during the rest of the year.”