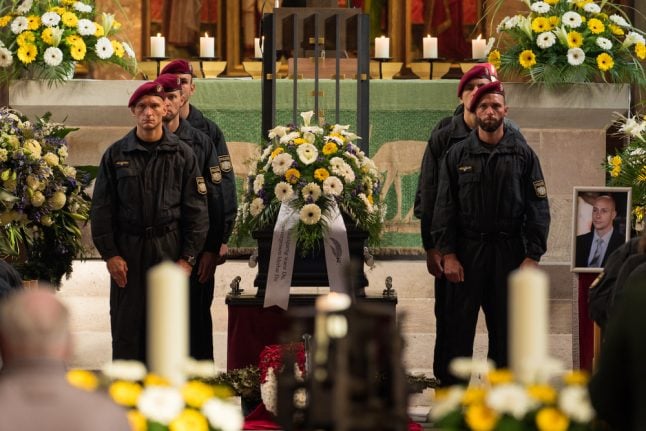 The coffin of the police officer in Bavaria who was shot and killed by a 'Reichsbürger'. Photo: DPA.

State prosecutors in Nuremberg are investigating two police commissioners and colleagues of an officer who was shot and killed by a self-declared Reichsbürger – someone who does not recognize the government or laws of Germany.

A 50-year-old chief commissioner is suspected of indirectly helping the extremist in the shooting because he failed to act on his knowledge of the Reichsbürger, given that he had been chatting with him through cell phone messages for some time before the shooting.

Prosecutors said on Monday that the 50-year-old knew about the weapons possessed by the Reichsbürger and also was in touch with “like-minded” people.

Another 49-year-old commissioner is also under investigation for betraying department secrets. Prosecutors say he looked into department information to see whether there was a record of a weapons permit for the Reichsbürger. The 40-year-old was also found to be possessing forbidden items such as ninja stars, a throwing knife and a non-lethal gun without authorization.

Police in October had gone to raid the Reichsbürger’s home in Georgensgmünd, Bavaria to seize his 31 firearms after he was deemed to be no longer “safe” in possessing them. But the man immediately opened fire on police, and killed a 32-year-old officer.

Since then, the Reichsbürger movement has been put under greater official supervision and it has emerged that police departments across the country had investigated Reichsbürger affiliates within their own ranks.

People who are part of the Reichsbürger scene assert that the German Reich, or even Prussia, still exists, with some groups establishing their own “government”. They therefore often come into conflict with authorities for refusing to pay taxes or forging their own forms of identification.

Prosecutors now say that the 50-year-old commissioner knew how dangerous the Reichsbürger in Georgensgmünd was and should have been able to predict that he would have used his weapons against police.

“[The chief commissioner] was officially obligated to pass on this knowledge,” according to prosecutors, adding that the death of his colleague could have been prevented.

Both commissioners have been suspended from the force since November.