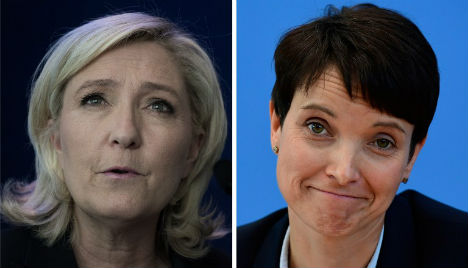 AfD head Frauke Petry (right) is hosting Marine Le Pen. Photo: Tobias Schwartz, Philippe Lopez / AF
Billed as a “counter-summit”, organisers said the parties would use the event in the historic Rhine river city of Koblenz to set out their joint “vision for a Europe of freedom”.
National Front (FN) leader Le Pen will share the stage with Frauke Petry of the anti-immigration Alternative for Germany (AfD), Geert Wilders of the Dutch anti-Islam Freedom Party and Matteo Salvini of Italy's anti-EU Northern League.
“The aim is to outline the Europe of tomorrow,” said Le Pen, who is tipped to make it into the second round of France's presidential election in May.
“Each of us is strongly attached to sovereignty and freedom in general. I believe that what also brings us together is a rejection of the European Union's laissez-faire policies,” she told French radio Classique on Friday.
She added that none of the participants could be described as “extreme right”, a label used “by our adversaries to discredit us”.
Boosted by Britain's Brexit vote and Donald Trump's surprise victory, the parties are hoping to shake up the political landscape, riding a wave of anger against incumbent leaders and anxiety over immigration.
The conference comes just a day after the US inauguration of Trump, who rose to power on a populist surge.
Wilders announced the conference on his Twitter feed using the hashtag “WeWillMakeOurCountriesGreatAgain” — a play on the maverick billionaire's slogan “Make America Great Again”.
The charismatic Dutch MP currently tops polls ahead of March parliamentary elections but observers say he is likely to struggle to find the coalition partners needed to govern.
The Koblenz congress is being organised by the European Parliament's Europe of Nations and Freedom (ENF) grouping, which was set up by Le Pen in 2015 and is now home to 40 MEPs from nine member states.
Political analyst Timo Lochocki of the German Marshall Fund said the gathering was mainly “just good PR” as the parties had little to gain from strengthening ties.
“This is largely to increase media attention,” he told AFP. “The reasons why people vote for these parties are purely national and are independent from any alleged cross-national cooperation between the far-right.”
The meeting of some of Europe's most divisive politicians has already stirred controversy in Germany.
Authorities in Koblenz are bracing for a large protest by a coalition of left-wing groups, mainstream political parties and unions. More than 1,000 police officers will be deployed to keep the demos peaceful.
Gathering under the banner “Koblenz stays colourful — No room for right-wing populism”, the demonstrators say they plan to play a rendition of Beethoven's “Ode to Joy”, the EU's anthem, outside the conference venue.
German Vice-Chancellor Sigmar Gabriel of the Social Democrats is expected to join the protesters, while Luxembourg's foreign minister Jean Asselborn is scheduled to address the crowd.
Chancellor Angela Merkel has ruled out meeting Le Pen, with her spokesman saying the French far-right politician's policies have nothing in common with those of the German government.
In the run-up to the congress, AfD MEP Marcus Pretzell, Petry's husband, triggered widespread criticism when he announced that several German media outlets had been denied accreditation because of their perceived bias.
Petry has come under fire for taking part in the meeting, with some prominent AfD members questioning whether the party should be cosying up to Le Pen, and in doing so, lurching further to the right.
The AfD started out as an anti-euro party but has since gained ground by railing against Merkel's liberal refugee policy, which has brought over a million asylum seekers to the country since 2015.
It is polling at between 11-15 percent, ahead of general elections in September, boosting its chances of becoming the first hardline rightist party to enter Germany's parliament since 1945.