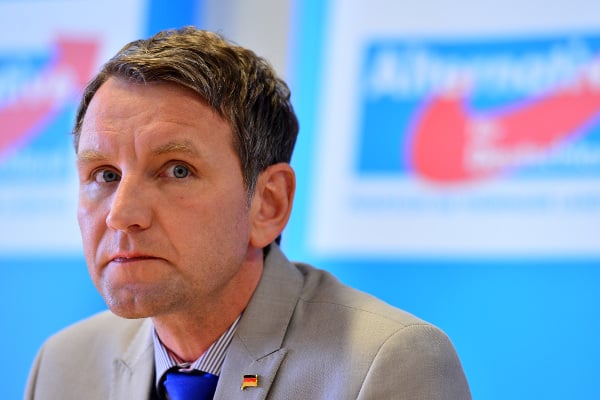 The chair of the AfD's Thuringia branch, Björn Höcke, stirred outcry across the country after he gave a speech in Dresden, urging the country to end its 'culture of remembering Nazi crimes'. He called Germans “a brutally beaten people” and argued that the country needed to do a “180-degree turn” on how it reflects on its Nazi past.

He also criticized the Berlin Holocaust memorial as a “memorial of shame” and condemned a former president who encouraged the country to take responsibility for the Nazis’ crimes, saying the former leader had spoken out “against his own people”.

Since the speech, politicians from various parties have called for Germany’s domestic security agency, the BfV, to monitor the AfD.

Green party politician Volker Beck demanded that the BfV monitor the “Höcke wing” of the AfD.

Baden-Württemberg’s interior minister, Thomas Strobl of the conservative CDU, said that the BfV should keep a “sharp eye out on the AfD overall, and on individual people in the AfD.”

“If the conditions are there for surveillance, it must be handled quickly,” Strobl told the Rhein-Neckar-Zeitung.

“The AfD is a disgrace with party status.”

Social Democrat (SPD) Burkhard Lischka told the Rheinische Post that at least the parts of the AfD  that “openly advocate populist-nationalist ideologies” should be monitored.

Thuringia’s state intelligence agency told Berlin’s tageszeitung newspaper that it was examining Höcke’s speech. The federal Interior Ministry has left the question open as to whether Höcke’s wing of the AfD could be monitored.

The state of Hesse’s education and cultural affairs minister, Alexander Lorz, is reportedly leading a disciplinary action against Höcke, according to DPA. Höcke is registered as a teacher in the central state, and had taught history and sports.

“No democrat can seriously want Höcke to express his hate speech as a teacher in a school,” said German parliament representative Özcan Mutlu, explaining why he supported the disciplinary action, according to the Frankfurter Allgemeine Zeitung.

Die Linke (the Left party) politician Diether Dehm said on Wednesday that he was filing a criminal complaint against Höcke for incitement of hatred, according to Spiegel Online.

The leader of the Green party in Saxony, Jürgen Kasek, also said he would not rule out filing a criminal complaint against Höcke for incitement of hatred, after he reviewed the speech. Kasek said that it seemed clear that Höcke had spoken in an anti-constitutional way “in the style of the Nazis”.

Höcke has defended his comments, saying that he was acknowledging Germany’s shame over the genocide.

But his party’s leader, Frauke Petry, has also denounced his speech.

“Björn Höcke has become a burden for the party, with his go-it-alone attitude and constant sniping,” she told weekly newspaper Junge Freiheit.

The AfD (Alternative for Germany) started in 2013 as a eurosceptic party, opposed to the single currency, but has shifted further to the right, gaining success in state parliaments over the past year through its anti-immigrant rhetoric amid the influx of refugees.