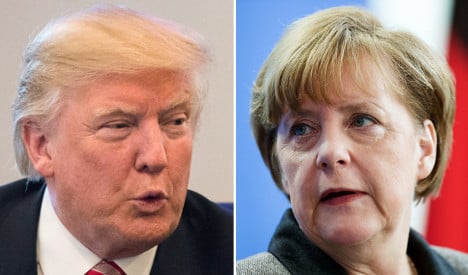 He blamed the refugee crisis for being the “straw that broke the camel's back” and triggered Britain's vote last year to leave the European Union.

“I think she made one very catastrophic mistake and that was taking all of these illegals, you know, taking all of the people from wherever they come from,” Trump said in an interview with The Times of London and Germany's Bild, adding he had “great respect” for the chancellor.

Some 890,000 migrants, many of them fleeing war in Syria, entered Germany in 2015 after Merkel opened her country's doors in response to massive pressure on countries along the so-called “Balkan route” into western Europe.

The mass arrivals prompted an initial mass outpouring of support, but fear about the consequences has also driven anti-immigrant party Alternative for Germany to between 10 and 15 percent in polls.

One MP deserted Merkel's centre-right Christian Democratic Union this weekend over her refugee policy, as the Chancellor tees up a re-election bid later this year.

Trump said that he would start out “trusting both” Merkel and Russian President Vladimir Putin.

“Let's see how long that lasts, may not last long at all,” he went on.

While he allowed that Merkel was a “fantastic leader,” the Republican said that Germany had “got a clear impression” of the consequences of her policy from a deadly December 19 terrorist attack in Berlin in which a hijacked truck was used to mow down Christmas market patrons, killing 12.

Berlin suspect Anis Amri, a Tunisian national, entered Europe via Italy in 2011 and served a four-year prison sentence there before allegedly carrying out the attack.

Trump also argued that the mass arrivals in 2015 were “the final straw that broke the camel's back” in convincing British voters to back leaving the European Union in a June 24th referendum.

Pro-Leave campaigners warned in the wake of the crisis that refugees would flood into the UK, producing a poster showing a crowd of Middle Eastern men under the words “Breaking Point”.

Britons were wise to choose to leave the 28-member union, Trump said, arguing that it was a “basically a vehicle for Germany.”

“Other countries will leave” the European Union in future, Trump prophesied.

In comments set to cause further consternation among eastern European NATO countries nervous about Moscow following Russia's annexation of Crimea and involvement in Ukraine, Trump also said NATO was “obsolete”.

“I said a long time ago that NATO had problems,” Trump told The Times of London and Bild

“Number one, it was obsolete, because it was designed many, many years ago,” he said.

“Number two, the countries aren't paying what they're supposed to pay.”

On the campaign trail, Trump said he would think twice about helping NATO allies if the United States were not “reasonably reimbursed” for the costs of defending them.

After Trump's victory, NATO Secretary General Jens Stoltenberg said the alliance had been a bedrock of transatlantic security for “almost 70 years” and was especially needed at a time of new challenges.

Spending has been a common source of friction within the 28-nation alliance over recent years.

The core military contributor to the alliance is the United States, which accounts for about 70 percent of spending.

In 2014, stung into action by Russia's intervention in Ukraine, upheaval in the Middle East and North Africa, NATO leaders agreed to reverse years of defence cuts and devote the equivalent of two percent of economic output to defence.

“There's five countries that are paying what they're supposed to. Five. It's not much.”

German Foreign Minister Frank-Walter Steinmeier said on Monday that Trump's NATO remarks have caused concern at the US-led military alliance and also appeared at odds with his own officials.

Steinmeier said he had met NATO head Stoltenberg earlier on Monday “where the statements of President-elect Trump… were received with concern.”

“This is in contradiction with what the American defence minister said in his hearing in Washington only some days ago and we have to see what will be the consequences for American policy,” he added.