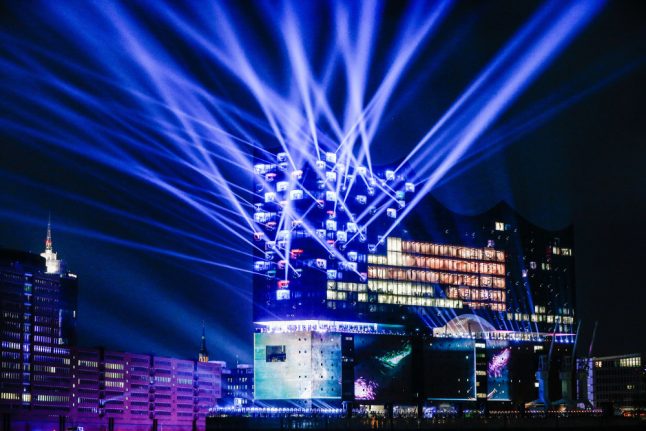 Chancellor Angela Merkel and President Joachim Gauck joined 2,100 guests at the inaugural concert under tight security in the grand hall of the Elbphilharmonie, which has electrified critics with its audacious design and world-class acoustics.

The white interior and unique design seemed to enchant even the most high profile guests.

Merkel takes in her surroundings on the opening night. Photo: DPA.

The three-hour-long programme met with a long standing ovation.

Billed as a cultural monument ready to rival the Sydney Opera House, the building came in more than six years overdue and at ten times the initial budget, with a cost to the venerable northern port city of €789 million ($829 million).

Gauck said he was “awed” by the “incredibly beautiful” architecture and its “wonderful sound” but acknowledged its turbulent beginnings.

“The Elbphilharmonie has been called a dream and a nightmare, a global star and a joke, an embarrassment and a wonder,” he said.

But the enormous project's success would come from “the magic of its contrasts”, he said.

“The Elbphilharmonie can become what many people in Hamburg hope for: the symbol of a cosmopolitan metropolis that is open to the world, and a jewel in the crown of Germany as a nation of culture.”

Merkel, a passionate classical music fan, later told NDR public television the opening had been historic as the dawn of a national landmark.

“One day we will all be very proud that something was built in our lifetime that people will still refer to in 50 or 100 years, saying 'look, that was what happened on January 11th 2017'.”

Jutting out from the city at the end of a pier on the Elbe River, the Elbphilharmonie has a boxy brick former cocoa warehouse as its base, with a breathtaking glass structure recalling frozen waves perched on top.

Sandwiched between the two levels, a public plaza protected by giant curved glass windows offers stunning views of the harbour, the spires of the charming old trade centre and Hamburg's temperamental skies.

Earlier Mayor Olaf Scholz defended the project, saying that its sold-out concerts through July and the more than 500,000 visitors who have already flocked to the building proved the Elbphilharmonie was winning hearts.

“It was a difficult birth but they have adopted the child,” Scholz, who inherited the scandal-plagued boondoggle from his predecessor, said of the 1.7 million residents of Germany's second city who have footed the bill.

Officials say the Elbphilharmonie is the kind of sparkling jewel, like Frank Gehry's Guggenheim museum in Bilbao, Spain, with the power to boost a city's international profile overnight.

This month, the New York Times cited Hamburg among its top ten tourist destinations for 2017 thanks in large part to the opening of the Elbphilharmonie.

Scholz insisted that the Elphie, as the two-hall concert house has been nicknamed, would be a building for the people, with diverse events appealing to visitors beyond the well-heeled classical music set.

“It is my aim that every pupil in a Hamburg school will see a concert here,” he said.

Scholz said the building would embrace the long musical tradition of Hamburg, the birthplace of Brahms and Mendelssohn and the cradle of the Beatles' early stardom, and soon host concerts by the world's top orchestras.

Musical director Christoph Lieben-Seutter promised eclectic programming, including a series of concerts featuring Syrian music in the spring honouring the thousands of asylum seekers who have arrived in the city.

The Elbphilharmonie's completion marks a rare urban development success story in Germany, which has been plagued by planning disasters such as Berlin's international airport, now five years behind schedule and counting.

To claw back some of the investment, Swiss architects Jacques Herzog and Pierre de Meuron, who also designed Beijing's “bird's nest” Olympic stadium and the Tate Modern gallery in London, added posh apartments, restaurants and a luxury hotel complete with an in-house meditation consultant.

The evening was designed as a showcase of Germany's soft power through high culture, and spotlighted the acoustic potential of the hall's “vineyard” layout with seats stretching up in steep terraces from the stage.

For those not lucky enough to snag tickets for opening night, a light show on the Elbphilharmonie's glittering facade entertained crowds gathered outside in wintry weather.