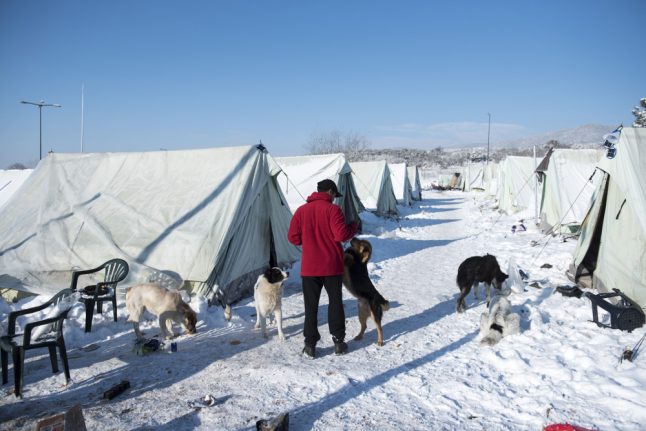 A refugee on Thursday in Greece, living in a tent amid snow. Photo: AP/dpa

Under the EU's so-called Dublin rules, would-be refugees must file for asylum in the first member-state of the bloc they enter, often the Mediterranean nations of Greece and Italy.

If asylum seekers have travelled on to other EU nations, they are to be returned to their first port of call.

But that requirement had been halted for Greece, which together with Italy has been the main point of entry for the more than one million immigrants who have entered the bloc since 2015 fleeing war and poverty in the Middle East and Africa.

“In line with the recommendation from the European Commission, Germany believes that such transfers will be possible from March 15th,” said the spokesman, Tobias Plate.

The EU recommended on December 8th that member states resume sending asylum seekers back to Greece from March next year, after such transfers were halted since 2011.

Athens has criticized the EU's assessment, with Migration Minister Yannis Mouzalas saying the current legal framework was “unable to respond to the historic migration flows and leaves the burden to the member states that migrants first arrive in”.

German refugee relief group Pro Asyl has also raised concerns, warning that the measure would put the asylum system in Greece, a country still recovering from a deep debt and economic crisis, under further pressure.

Photos of refugees living in tents amid heavy snowfall in Greece caused outrage recently, and the European Commission on Monday called such conditions “untenable”.

Laundry hung out to dry at a refugee camp 86km north of Athens. Photo: AP/dpa.

Germany's 2015 decision to open its doors to Syrian refugees, and to effectively suspend Dublin rules for them, brought 890,000 asylum seekers in that year alone.

But the move by Chancellor Angela Merkel has proved controversial, and the government has since sought to bring numbers down.

Last year, the figure dropped sharply to 280,000 arrivals, largely due to the closure of the Balkan overland route and a fragile EU-Turkey deal to limit the mass influx.

The plan to return asylum seekers to Greece could further slash new arrival figures, ahead of general elections expected in September, when immigration is set to figure as a key issue.