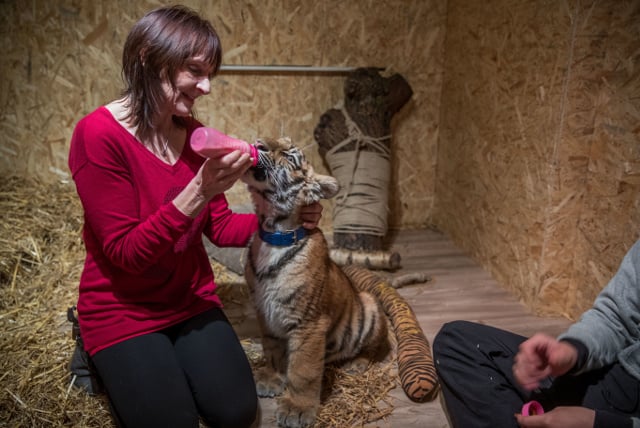 In the long grass on the Mecklenburg coast, she's hardly visible.

Elsa doesn't let her prey out of her sight, crouching, creeping silently, then jumping and grabbing – her plush toy.

IN PICTURES: The adorable tiger cub being raised by a German family

Farell comes from a family of circus workers and grew up with predatory animals. Together with her husband Saad Rose, she has been running an amusement park since 2002, where 13 tigers and five lions live.

Now, she is raising the abandoned baby tiger.

In November, Farell's 22-year-old son Dwayne cleared out his room for Elsa. The Siberian tiger had been born at the end of August in a travelling circus while it was visiting the island of Rügen, but she was rejected by her mother. She was nursed back to health by a vet, until she came to the Farell family. “In our house, we have already raised a lion and a tiger. Animals are like family members to us,” says Rose.

“Not so rough, no!” Monica Farell reprimands the now four-month-old cat, who weighs over 20kg. “She is not a cuddly cat, but a predator.”

Elsa still has her milk teeth, but the claws on her strong paws are already very sharp, explains the big cat expert. “Elsa is a real fighter.”

Dwayne prepares to play with the tiger by putting on several extra sweaters.

“We do not have such thick coats like hers.”

He says he is always on his guard because “tigers like to attack from behind.”

Playing freely in the garden, the forest or on the nearby beach is important training for the growing feline. She learns how to follow her instincts, explains Rose.

“The movement and experiences in the environment make the animal strong and self-confident, give it a stable character.” In March Elsa is to move from the bedroom at the Farell's house to the Tiger Park at their amusement park. There, she will have her own enclosure and shelter, with an experienced older female as a neighbour.

“Tigers are loners, but they need interaction with their fellow-citizens,” Rose explains.

Until then, Elsa still gets a bottle of cat milk several times a day, and snacks on chicken breast and beef chops with egg yolk.

“This is a full-time job, just like a baby,” says Farell. “You've reached the limit when they're no longer on the leash.”

When she's playing, the cub likes to take a bright red shirt, given to her by her new godfather and Berlin rapper Kontra K. (“Labyrinth”), so that she remembers his smell.

Siberian or Amur tigers, the largest cats on earth, grow to over two meters long and can weigh 200kg. Today more of the animals live in zoos than in the wild.

According to the World Wide Fund for Nature (WWF) there are about 530 wild Siberian tigers, and they are located in the far east of Russia and in the adjoining northeast of China. They are also classified as a “highly endangered” species.

According to the Association of Zoological Gardens (Berlin), more than 1,000 Siberian tigers live in zoos and animal gardens around the world. About 40 of them in Germany, Austria and Switzerland belong to a breeding program.