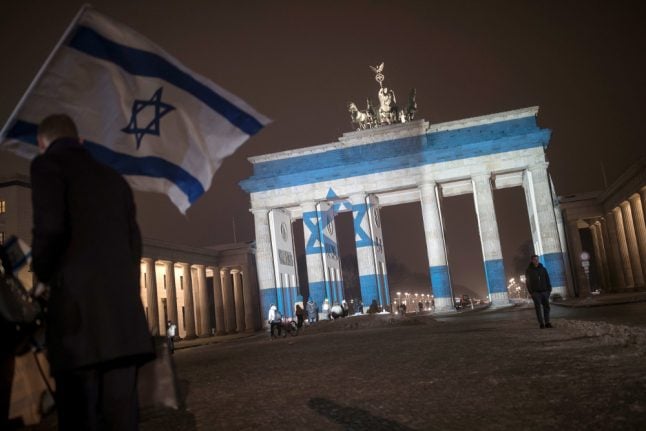 The Brandenburg Gate lit up with the Israeli flag to remember those killed in an attack in Jerusalem. Photo: DPA.

After a driver with possible ties to Isis ran a truck into a group of soldiers in Jerusalem on Sunday, killing four people, Berlin lit up its iconic Brandenburg Gate with the Israeli flag – as the capital city often does to honour victims of tragedies.

In response, AfD MEP Beatrix von Storch questioned why the Berlin landmark had not paid equal tribute to German victims of terror – even though the city had done just that.

“This is correct,” von Storch began the tweet in response to the embassy’s post. “When exactly were memorial lights of black-red-gold shown in the country’s capital? WHEN???!”

The tweet was liked more than 300 times. But it didn’t take long for others on social media to point out that the city’s famous marker had in fact recently been lit up to honour the 12 victims of the December 19th Berlin Christmas market truck attack.

Green party MP Volker Beck wrote back, including a photo of the event as proof.

“The answer is December 20th. It’s a shame that you did not notice anything and that you cannot use a search engine,” Beck wrote.

“Do you actually know what happened in this country, or are you too blind from hate?”

Von Storch then later replied, acknowledging that the Brandenburg Gate had been lit up on December 20th. But she also incorrectly implied that Chancellor Angela Merkel had “refused a memorial” – even though Merkel in fact attended one.

“With the Chancellor refusing a memorial, one can have doubts. A moment of silence in the Bundestag [German parliament] is maybe also still to come,” she wrote.

But Beck again fired back, pointing out that Merkel had in fact attended a vigil after the attack, and that the Bundestag has not yet been in session since the attack.

“The Chancellor was at the remembrance service. Me too,” Beck tweeted. “Where were you? Where was the AfD?”