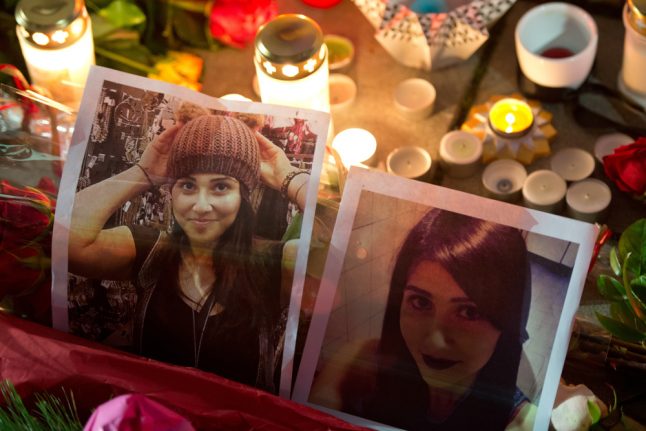 A memorial set up for student Tugce Albayrak. Photo: DPA.

An administrative court in Wiesbaden on Wednesday agreed with immigration authorities that the convicted assailant Sanel M. should be deported from Germany. The 20-year-old can still appeal the decision within two weeks.

Sanel M. was convicted and sentenced to three years in prison in 2015 for gross bodily harm with fatal consequences after he hit a woman in the head, ultimately leading to her death.

In November 2014, Tugce Albayrak had confronted the young man in a carpark in Offenbach for harassing two young girls inside a McDonald’s. Sanel M. struck her across the head, causing her to hit the ground and fall into a coma. The scene was captured on surveillance video and broadcast on national media, bringing greater attention to the attack.

Days later her family switched off her life-support system on her 23rd birthday, sparking a wave of sympathy in Germany amid widespread revulsion over the assault.

About 1,000 mourners attended Albayrak's funeral and a mass online petition called for her to be posthumously awarded the Bundesverdienstkreuz (Federal Order of Merit) for her bravery. Chancellor Angela Merkel called Albayrak a “role model” and President Joachim Gauck said she shows “bravery and civil courage in an exemplary way”.

The Wiesbaden immigration office ordered Sanel M, in September 2016 to be expelled from Germany for eight years and called for his immediate deportation. He then brought a complaint to the administrative court.

The court agreed that Sanel M. presented a public security threat if he stayed in the country, in part based on his original conviction and a psychological assessment conducted in prison. Not only had Sanel M. violated prison rules multiple times, but his actions there had also prompted disciplinary and criminal procedures.

Though he had shown more positive change over time, he was still considered to be a long-term risk. And while Sanel M.'s family lives in Germany, the court said that he could still be able to form new bonds in Serbia, though it would at first be difficult.