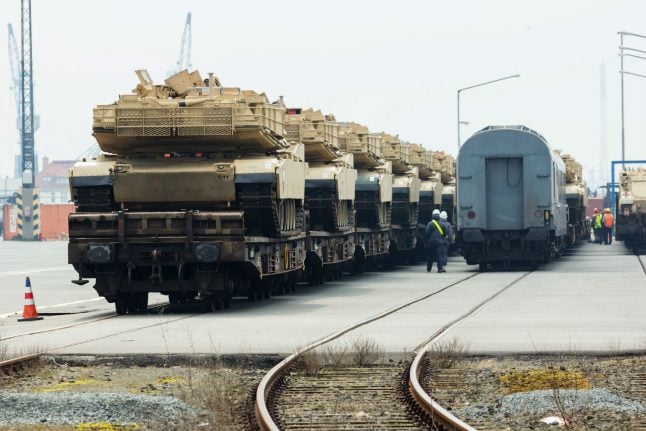 The arrival of three US military cargo ships at the north German port signals a step up in a military stand-off between NATO and Russia, after Moscow annexed Crimea from Ukraine in 2014.

On Wednesday the cargo ship Resolve docked at Bremerhaven. By Saturday, Freedom and Endurance will have followed in its wake.

After unloading, the tanks will make their way towards Poland, mainly by train, before being deployed across eastern and central Europe in military training exercises.

The deployment is part of the US mission Atlantic Resolve, which the US states is for the sake of ensuring security and stability in the eastern regions of the NATO alliance.

“Three years ago, the last American tank left Europe; we all wanted Russia to be our partner,” Lt. Gen. Ben Hodges, the commander of US Army Europe, told the Wall street Journal in December.

“My country is bringing tanks back… as part of our commitment to deterrence in Europe.”

The brigade will be headquartered in Poland, but used in military exercises in the Baltic states.

Lithuania, Latvia, Estonia and Poland all have borders with Russia and say that they feel threatened since Moscow annexed Crimea.

A Bundeswehr (German army) spokesperson told the Märkische Oderzeitung that trains with a total length of 14 kilometres will be needed to transport all the tanks.

“From January 7th until January 14th, three trains will transport the military equipment every day,” he said.

According to the Bundeswehr, most of the tanks will be transported by train. But military convoys will pass through Hamburg, Lower Saxony, Saxony-Anhalt and Brandenburg

The large majority of the 4,000 US soldiers who belong to the brigade will arrive for deployment by plane.

The troops and equipment are from the 3rd Armored Brigade Combat Team, 4th Infantry Division, out of Fort Carson, Colorado.

“This effort is part of our European Reassurance Initiative to maintain persistent, rotational presence of air, land, and sea forces in central and eastern Europe,” a department of defence spokesperson said on Thursday.