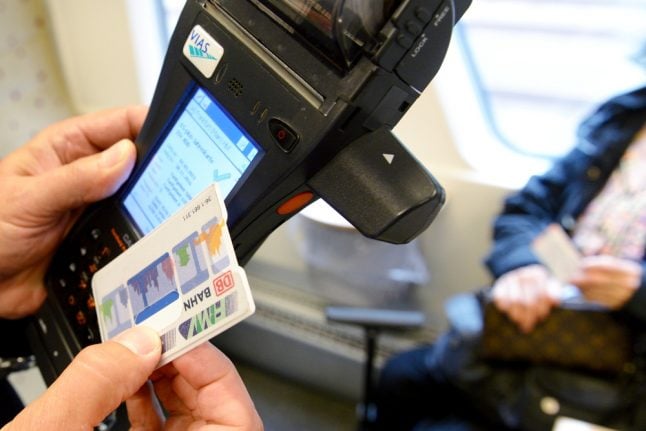 Getting your ticket checked could be much easier in the future. Photo: DPA.

Electronic chip cards or mobile phone tickets could make paper tickets of yore unnecessary by 2019, according to a plan set out by Transport Minister Alexander Dobrindt.

According to a plan seen by publishing group Funke Mediengruppe and reported on Friday, the Transport Ministry wants to introduce a uniform e-ticket that would connect public transit systems across nearly all of the country under one card.

The aim is to make public transit easier and more attractive, benefiting customers of around 370 transit companies and roughly 75 percent of the population. Passengers would be able to use the same card or cell phone app without having to buy a new ticket in each city to which they travel – and without having to dig out loose change to feed into a ticket machine.

“We need a Germany-wide, mobile platform that links passengers’ information across regions and makes it possible to book e-tickets,” Dobrindt told Funke Mediengruppe.

Another goal would be to allow e-card holders to use the system for renting cars and paying for parking.

“We must advance digitalization and interconnection in this area.”

Ten million people in Germany already use similar e-cards for their individual cities, with companies offering yearly or monthly tickets. Some companies also offer the chance for passengers to buy tickets online and then have digital tickets available on their mobile phones.

But most tickets are still in the old-school form of paper, writes Funke Mediengruppe.

To realize his vision, Dobrindt said his ministry is working with the various transport companies. The idea is part of a larger series of 12 projects aimed at digitalization that is expected to cost €16 million for this year and the next.

The technology to make it possible has already been available for years – all existing e-tickets and smartphone tickets work the same way. But the ministry still needs a central database of all prices for the different transit companies, as well as a way to transfer revenues when, for example, a customer from Berlin travels in Hamburg.

The ministry plans to start developing the project next week and have it ready by summer 2018. But Nils Zeino-Mahmalat from the Association of German Transport Companies (VDV) warned that travellers should not set their expectations too high: it will be hard for small and medium-sized companies to join the digital revolution.

Instead, the project will develop region by region.

“We will not wake up one morning, and a connected public transport system is there,” Zeino-Mahmalat said.