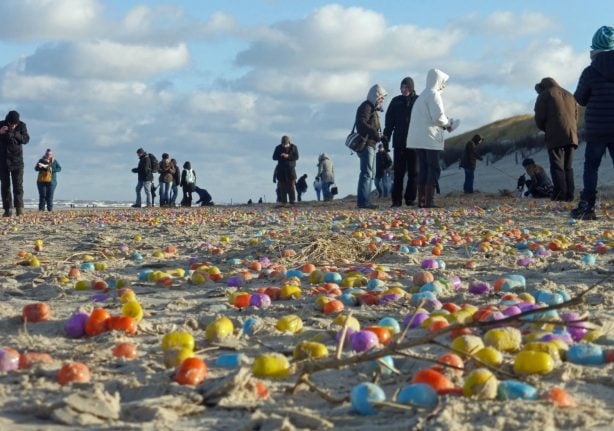 The surprise eggs on the beach in Langeoog. Photo: DPA

Thousands of plastic eggs containing toys washed up on the beaches of the island off Germany’s northwest coast.

The eggs most likely originated on a ship which was sailing under a Danish flag from Yangshan Port in China to Bremerhaven, according to Bild.

The ship had lost five containers while battling through the storm Axel on Wednesday.

The storm had reached hurricane force in certain parts of the country on Wednesday and caused flooding in Hamburg and on the Baltic coast.

Locals and tourists joined in collecting the colourful toys, with some carrying bags laden with the little eggs away with them.

“That was fun – especially for the kids,” one local told Bild.

But when Lego toys also started washing up on the beach on Thursday, some people began to show signs of frustration.

“This isn't funny anymore – it's damaging for the environment and highly dangerous for animals,” said mayor Uwe Garrels.

By the mid-afternoon on Thursday, the last of the eggs appeared to have been cleared up, with one Twitter user writing: “The Kinder surprise surprise on Langeoog is gone. Many hands make light work and nature says thank you.”