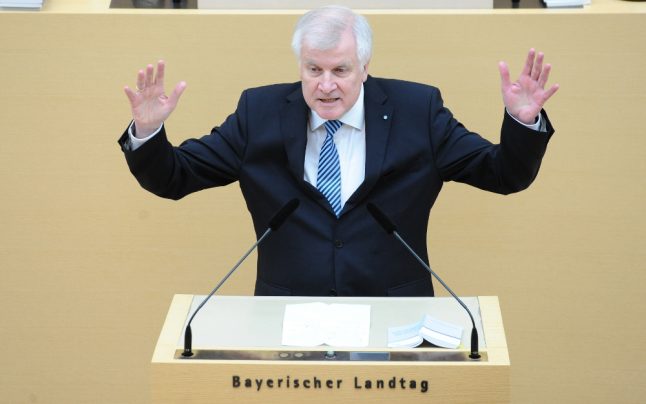 “I can only tell you this: a disintegration of the Bavarian state intelligence service will never come about,” Seehofer said.

When asked what he thought about the Interior Minister’s level of competence, Seehofer said he “does not give out grades”.

Seehofer, who also leads the CSU, sister party to Chancellor Angela Merkel’s CDU, has been an outspoken critic of the Chancellor’s policies, and in particular her refugee policies.

Merkel herself backed her Interior Minister and CDU party mate on Wednesday, according to her spokesman.

“We live in a time of new challenges, and the central question is what are the unpleasant answers to these challenges. Less important are the questions of whether organizational changes are nice or not nice,” said Merkel’s spokesman.

“To outright oppose and rule out proposals is not the right way.”

The Interior Minister’s proposal comes on the heels of heated criticism of the country’s security methods in the wake of the Berlin terror attack on a Christmas market last month.

Still, de Maizière’s insistence that his plan could help close security gaps has met with opposition, even from within his own party.

Hesse interior minister Peter Beuth, CDU, called the reform plans “nonsense” and said such swift moves could “undermine the confidence of the citizens in the state”.

“It would also call into question the entire federal security architecture,” Beuth said.

NRW interior minister Ralf Jäger, a Social Democrat, warned that centralization would not yield any advantages in combating terrorism.

“To abolish the state intelligence services and create a giant federal authority does not make us better in the fight against terror, but rather more bureaucratic and clumsier,” Jäger said.

“It would be completely wrong to now rip apart the federal system.”