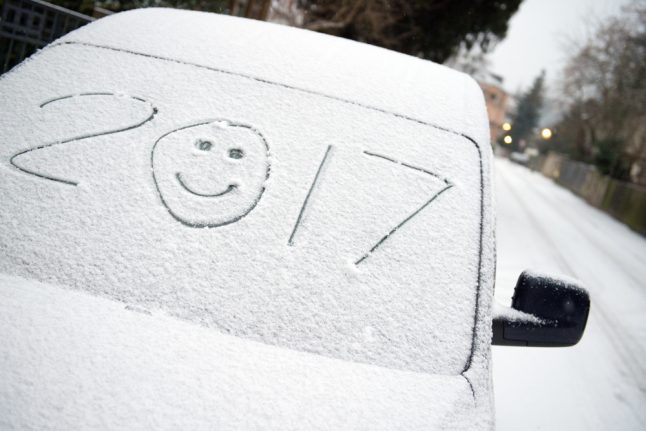 Snow on a car in Dresden on Monday. Photo: DPA.

Residents of North Rhine-Westphalia, Saxony, Saxony-Anhalt, Thuringia, Berlin and Brandenburg were all greeted with fresh snow as the new year began.

“Snow could fall until before noon,” said a spokeswoman from German weather service DWD on Monday. “Also in the afternoon, it could snow again, however the snow will quickly thaw and turn into slush.”

A child plays in snow on Sunday, January 1st in Frankfurt. Photo: DPA.

And while the frosty weather has caused some issues during the morning commute in the western state of North Rhine-Westphalia, drivers there are not expected to have to deal with any major setbacks.

“There have been a few weather-related accidents, but there has not been chaos,” said a police spokesman in the state capital of Düsseldorf.

And over the next few days, North Rhine-Westphalia is expected to maintain its wintry atmosphere.

“Snow and sleet will accompany us this week,” said the DWD spokeswoman. “But a sudden onset of winter is not to be expected.”

A cyclist riders through snow in Cologne on Monday morning. Photo: DPA.

Eastern states also experienced their first snowfalls of the year. A weather service spokesman in Leipzig said that snowflakes started to descend at about 3am.

Across Saxony, Saxony-Anhalt and Thuringia, the average snowfall was about two centimetres.

In the area around Eisenach, Thuringia, police said that snow had caused problems for several trucks driving along the motorways and the road services had to be called in during the early morning hours of Monday.

Berlin and Brandenburg also saw light snowfall, and police said that this had not caused any problems for drivers, or for public transit passengers.

Even those living in the southern city of Munich caught vistas of white on camera, like below.