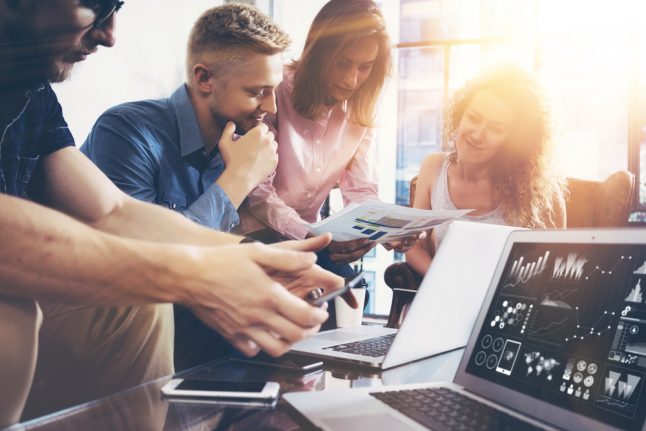 It reflects how the city’s conservative banking world is looking to catch up in the boom of startups and tech companies.

“The leader of the continent’s financial centre must also take on a leading position in the area of FinTech,” said Hesse’s economy minister Tarek Al-Wazir.

This speaks to the new ambition of the city on the Main River, home of the European Central Bank, to head in a more creative direction.

Financial institutions are looking for ways to keep up and retain young customers in an ever more digital world, where apps allow users to easily exchange money, or friends to split the bill to buy a present together.

Deutsche Bank in September launched its Digitalfabrik – digital factory – project for programmers and finance experts to develop digital banking projects. Commerzbank’s initiative CommerzVentures is investing in “the most ambitious young” startups, and the Deustche Börse marketplace organizer has started a FinTech centre.

And it’s not just Frankfurt that is looking to ride the wave of startups brought in by Berlin. In 2015, a new FinTech startup was founded nearly every other day across the country, according to Comdirect Bank. Still, most founders move to Berlin.

The capital city has 179 FinTech companies – more than Frankfurt, Munich and Hamburg combined.

“Berlin is in another league,” said Comdirect boss Arno Walter.

And Berlin also gets the bulk of venture capital from investors. Since 2012, €734 million has been fed into Berlin FinTech firms, which is five times as much as Munich has received.

Part of the reason for Berlin’s draw is also of course the fact that the city is still more affordable for housing and hiring as other cities, making it especially attractive for young talent.

But in order for Germany to truly compete on a global level with leading countries like the United States, it cannot solely rely on Berlin. The FinTech market in California alone is estimated to be worth €6.3 billion with around 74,000 workers. The German FinTech scene, meanwhile, is valued at $2.4 billion (€2.3 billion) with 13,000 workers.

One of Germany’s obstacles in meeting its potential is that startups are struggling to gather capital to expand and there are not as many investors. But now the German government is working on legislation that would make conditions more friendly for investors, such as creating tax incentives for those who rely on startups’ profits.

On the other hand, some experts have predicted that the United Kingdom’s vote to leave the EU will have a positive impact on investment in Germany’s tech scene as investors start to look beyond London.

And Germany is expected to expand its market size in the FinTech area to €58 billion by 2020, according to a study by the German Finance Ministry.

“The FinTech market in Germany shows a high growth and development potential,” the study stated.

Frankfurt hopes to be at the forefront of this with projects run by establishments like Deutsche Börse aiming to bring about better access to the stock market and more investors for startups. But it has competition beyond Berlin: Hamburg is gaining ground in FinTech firms focused on payments and billing, while Munich startups are focused on real estate and insurance.