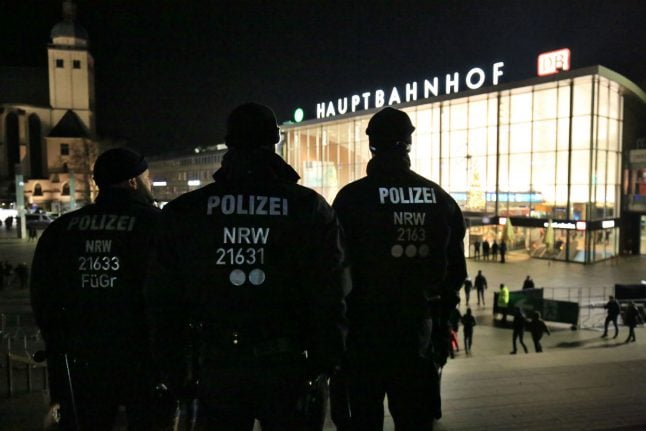 “The large police operation in Cologne and other cities worked in clearly limiting assaults and violence,” Simone Peter, leader of the Green Party, told the Rheinische Post on Monday.

But Peters questioned whether police had overstepped their legal limits “when a total of almost 1,000 people were checked and sometimes detained because of the way they look”.

At New Year celebrations in Cologne last year, hundreds of women reported being sexually assaulted in the area around the central train station.

The majority of suspects and the handful of men convicted for the assaults came from North Africa.

Cologne police significantly increased their presence this year, including the deployment of helicopters, to ensure that there would not be a repeat of the assaults.

On Monday a police spokesperson told Focus that the men were all already seen as likely criminals and had arranged to meet in the city centre of Cologne with the intention of committing crimes.

But Peter strongly criticized the labelling of these suspects as “Nafris” – an abbreviation of North Africans – which Cologne police had used on their Twitter account.

“It is completely unacceptable for organs of the state like the police to use derogatory labels like Nafri to describe North Africans,” she said.

Mathies conceded on Sunday that the word Nafri should not have been used for external communications.

But he added that it was irrefutable that there was an increase in crime by people from North Africa and that police needed a term to describe this internally.

The police chief said that this did not say anything about the vast majority of North Africans, who live in Germany without committing crimes.

On social media the use of the term Nafri and the criticism by Peters unleashed a furious debate over racism and political correctness.

Popular comedian Jan Böhmermann asked “By the way, what is the difference between Nafri and Neger (Nigger)?”

One Twitter user however commented: “Talk shows have been discussing sexual assaults committed by Nafris for a whole year – and now this debate about an abbreviation?”