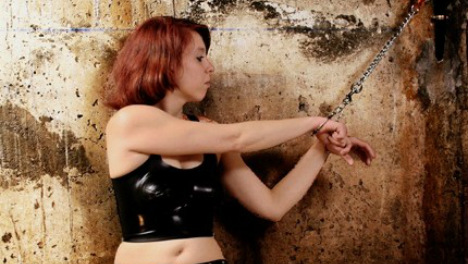 A woman chained to a wall in latex clothes. Photo: Olivier T/Wikimedia Commons

We defy you to read this story from February and not clench your thighs together to stop you wetting yourself.

It tells the story of a small town mayor who was discussing politics with townspeople when he gave them an unfortunate glimpse into his private life. And his defence is golden.

We went the extra mile on this story from March, talking to an expert from a Berlin sex shop who helped us understand why on earth someone would find themselves in such a pickle in the first place.

This story seemed to be a sad parable for what Berlin has become in the 21st century, at least that's how many readers viewed it.

It was the opening night of a vegan burger joint in one of the city's coolest neighbourhoods. But things soon got out of hand as hipsters just kept on pushing towards the doors.

You would think the queen of one of the most prosperous countries in Europe could afford an adviser to tell her wearing a dress emblazoned with swastika-like shapes isn't a good idea in Germany.

But nobody told Queen Máxima of the Netherlands.

How to react to this story?

In March, a man faced trial for killing his lover with a cucumber he had just used to make love to her. There was no doubt that the death was accidental, but how it happened might as well be added to dictionaries as the definition of tragicomic.

The story of a hapless conservative politician who accused the Turkish president of having sex with goats certainly had us spluttering into our morning coffee.

Detlef Seif meant to support Recep Tayyip Erdogan when he read out a profane poem about him on live TV, but it didn't come out that way… The story of a public swimming pool in Regensburg which banned Muslim women from wearing the burqini – a swimwear which covers the whole body – grabbed a lot of attention when it was reported in June.

The subject of Muslim dress, and what is and is not permissible in public, has been hotly discussed this year.

After terror attacks in July, conservatives raised the prospect of banning the burqa in public places, something which is already enforced in France.

Whatever the reason, people couldn't get enough of this story from August. When the swimmer noticed a fishing hook had penetrated his nether regions, he had to act fast.

A part of you grudgingly respects this man's persistent abuse of one of the most German of systems, the Pfand bottle recycling scheme. His answer to the judge on how he got through it was priceless.

Over 50,000 people in Augsburg had to leave their homes after an enormous British bomb was found in the town in December… and the timing couldn't have been worse.