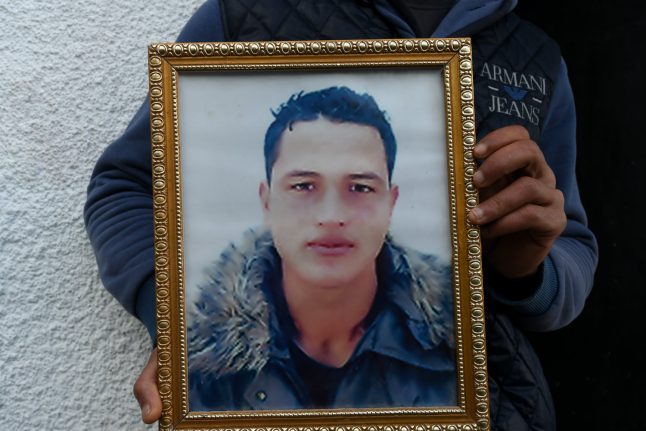 A portrait of suspected Berlin attacker Anis Amri in his hometown of Oueslatia, in Tunisia on December 23, 2016. Photo: Fethi Belaid/AFP
A statement said the three suspects, aged between 18 and 27, were arrested on Friday and were members of a “terrorist cell… connected to the terrorist Anis Amri”.
It made no direct link between the suspects and Monday's deadly attack on a Berlin Christmas market.
The interior ministry said that Amri had sent money to his nephew and encouraged him to pledge allegiance to the Islamic State group.
“One of the members of the cell is the son of the sister of the terrorist (Amri) and during the investigation he admitted that he was in contact with his uncle through (the messaging service) Telegram,” it said.
Amri allegedly urged his nephew to adopt jihadist “takfiri” ideology “and asked him to pledge allegiance to Daesh (IS),” it said.
The nephew also told investigators that Amri “sent him money through the post… so that he could join him in Germany,” the statement added.
The unnamed nephew was reported in the statement to have said that his uncle was the “prince” or leader of a jihadist group based in Germany and know as the “Abu al-Walaa” brigade.
Amri, 24, is believed to have hijacked a truck and used it to mow down holiday revellers at a Berlin Christmas market on Monday, killing 12 people in an attack claimed by the Islamic State group.
He was shot dead after pulling out a pistol and firing at two Italian policemen who had stopped him for a routine identity check Friday near Milan's Sesto San Giovanni railway station.
He lightly wounded one of the policemen before being killed by the other.
The Tunisian interior ministry did not specify where the three suspects were arrested but said that the “terrorist cell” was “active” between Fouchana, south of Tunis, and Oueslatia, hometown of Amri's family in central Tunisia.