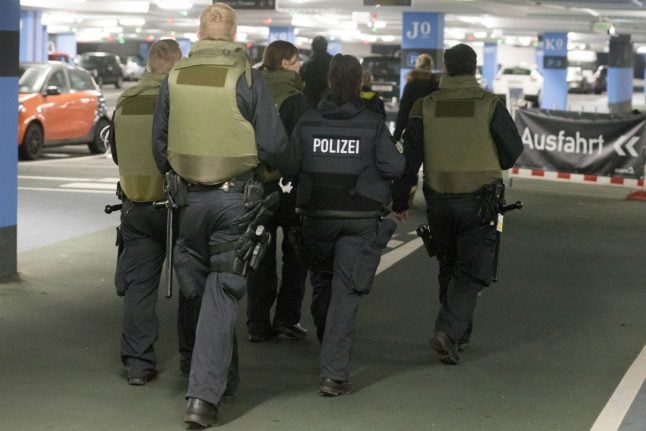 Police at the Centro mall in Oberhausen. Photo: DPA

The 28-year-old and 31-year-old brothers, born in Kosovo, are suspected of planning the attack on the Centro shopping mall in Oberhausen.

Centro is one of the largest shopping centres in Germany. Built in an abandoned steel factory 20 years ago, it is home to 250 shops on two floors.

“We are intensively investigating how much progress they had made in their plan and whether other people were involved in the plot,” a spokesperson for the police said.

Already on Thursday evening police upped their presence at the mall and the adjacent Christmas market, after receiving a tip off from an intelligence service.

Groups of six or eight officers could be seen patrolling the area with machine guns, checking the identities of shoppers and passersby.

Bild reports that the tip off came from Germany’s domestic security agency, the BfV. According to this report ambulance and fire services were put on high alert, in case anything should happen during the operation.

At this stage police are providing few further details about the arrests, but have said that they are not directly linked to the attack on a Christmas market in Berlin on Monday, which killed 12 people.

Police are currently searching for Tunisian man, Anis Amri, as the main suspect for the crime.

“There is no connection with the Amri case other than that they both have a terrorist background,” a spokesperson told the Süddeustche Zeitung.