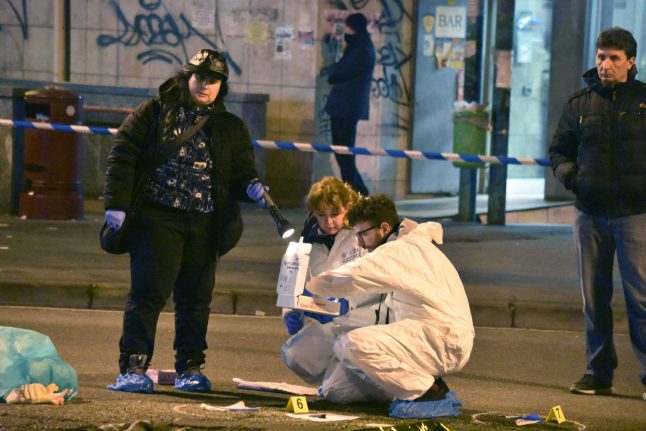 The scene of the shoot out in Milan. Photo: DPA

– Amri has been shot and killed in Milan, the Italian interior minister has confirmed.

– Marco Minnitti, Italian interior minister said at a press conference on Friday that there was a shootout at a routine ID check early on Friday and Amri was fatally wounded.

– Contradicting media reports, Minnitti said Amri was on foot at the time.

– Amri had links to Italy, having arrived in the country from his native Tunisia in 2011.Shortly after his arrival he was sentenced to a prison term for starting a fire in a refugee centre. He was released in 2015 and made his way to Germany.

– The German interior minister said Thursday it is highly probable that Anis Amri was the attacker who ploughed a truck into a Berlin Christmas market on Monday evening, killing 12 people.

3.03pm Isis have published a video in which allegedly shows Anis Amri swearing allegiance to Isis and its leader Abu Bakr al-Bagdadi.

The video, released by Isis-linked agency Amaq, showed Amri speaking directly to a camera while standing outdoors wearing a winter coat and earphones.

It was unclear exactly where or when the video was filmed.

As well as his pledge of allegiance, Amri declared his desire to avenge Muslims killed in air strikes and called for attacks against “Crusaders”.

Amaq had earlier said the man shot dead by Italian police near Milan on Friday carried out the Berlin attack.

2.13pm Isis said that the man shot dead by Italian police near Milan on Friday carried out the deadly truck attack on a Berlin Christmas market.

“The Berlin attacker carried out a new attack against an Italian police patrol in Milan and was killed in an exchange of fire,” the Isis-linked Amaq agency said, in a reference to the fatal shooting of Anis Amri, the prime suspect in the Berlin attack, by Italian police.

1.55pm Germany's federal prosecutors have confirmed the death of Amri.

They say they are now looking into whether he had a support network as he fled. They are also seeking to establish whether the weapon he used to shoot an officer in Italy was the same one he used to kill the Polish truck driver in Berlin on Monday.

12.23pm While German authorities have been cautious about confirming the dead man's identity, Italy's interior minister said there was not a “shadow of a doubt” that it was Amri. Police said he was identified using facial recognition data and fingerprint analysis.

12.02pm SKYTG in Italy is reporting that the weapon in the shootout was the same that killed the Polish lorry driver who was Monday's 1st victim.

11.54am The officer who killed Amri was 29-year-old Luca Scata, Ansa reported. The injured officer has been named as Cristian Movio, 36.

The Italian anti-terrorism unit DIGOS said on Friday that Amri had arrived in Milan at 1am by train, travelling from Chambery in France via Turin.

11.49am An interior ministry spokesman in Germany has said at the government presser that there are a further 350 people in the country considered dangerous, or in contact with such people, or having sympathies with them. 80 of these are already in prison.

Amri was considered dangerous and questions have been asked about how he was able to disappear from the view of authorities.

11.41am The German interior ministry are giving a press conference and saying very, very little. They won't confirm the death of Amri but acknowledge that Italy has already done that.

They thank the Italians for their “trust-based cooperation.”

Also asked about German investigators and whether they have failed in their work to prevent a terror attack, officials are not commenting, saying victims have not been buried yet.

11.16am Marco Minnitti, the Italian interior minister has confirmed Amri is the man killed.

“The person who was killed, there is no doubt that he is Anis Amri,” he said

“He was the most wanted man in Europe and we immediately identified him and neutralised him. This means our security is working really well.”

“We have let the German federal prosecutor’s office know. We have told their police force and authorities.”

11.08am The Italian newspaper il Giornale has tweeted a picture which it says is of the square.

“Anis Amri has apparently been killed last night in a shootout on the outskirts of Milan,” reads the tweet.

11.03am Spiegel is reporting that Amri was shot on the May 1st square in the Sesto San Giovanni neighbourhood in the north of Milan.

He shouted “Allah hu Akbar” before drawing a weapon and shooting at two officers. They returned fire fatally wounding him, according to the report.

German prosecutors have not yet confirmed the details.

11.00am Reuters reporting that he shot and injured a police officer after being asked for ID

10.55am An Italian magazine is claiming that Amri was shot in a “routine road check” at 3am on Friday morning.

La Stampa, meanwhile are reporting that In his backpack, police found a train ticket from France.

10.44am Reports are coming through that Amri has been shot and killed after a shootout in Milan, Italy.

10.39am Broadcaster RBB reports that Amri was spotted on CCTV eight hours after the attack waiting outside a mosque in the central Moabit district of Berlin.

According to the report he was filmed early on Tuesday morning outside the mosque, which is a Salafist meeting point know to German intelligence services. He had been spotted at the mosque twice earlier in the month.

10.31am Police in Hamburg are reviewing whether Amri could have been the man who stabbed a teenager to death there in the autumn.

The Funke media group say that there is a resemblance between the photofit and Amri, but investigators told them they have no further evidence linking him to the murder.

Isis claimed the attack on a 16-year-old in October, but investigators doubt the claim.

10.26am Amri may have been spotted in northern Denmark.

Danish police said on Friday that a man matching the description of Berlin terror suspect Anis Amri has been spotted in the northern Jutland city of Aalborg.
Police said that the area had been blocked off and requested that the public stay away.

10.23am The Süddeutsche Zeitung has an article on why Amri left his ID in the cab of the truck. Was it intentional or a mistake?

According to the article, terrorists often leave ID cards behind so that their name will be associated with the attack. It could also be a strategy by Isis to show that someone who came to Germany as a refugee was a terrorist – the hope being that this would lead to fear of all refugees.

But often those who leave IDs behind intend to die, the fact Amri fled suggests it could have been a mistake.

10.14am Every passenger on a flight which arrived in Stockholm from Berlin on Thursday evening was checked on arrival in Sweden.

According to a report in Swedish tabloid Expressen which has not been confirmed by police, the check was done because of a tip-off that a man resembling Anis Amri.

No one was detained and nor is anyone who was on board suspected of a crime, police said after the check was completed.

10.02am Berlin daily Tagesspiegel is reporting that investigators believe suspect Anis Amri is still in Berlin.

A witness reportedly saw Amri with cuts to his face and hospitals in Berlin and Potsdam have also been informed to keep an eye out.

“We were told he is injured, highly dangerous, and probably still in Berlin,” a doctor told the paper.