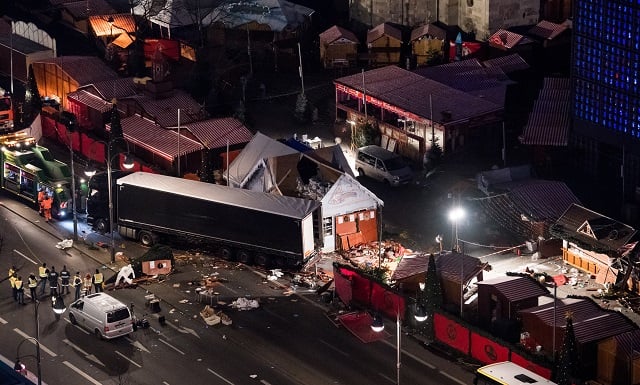 The Berlin market where a truck drove into the crowd. Photo: DPA

– At around 8pm, the truck drove into the Christmas market near the capital's Kaiser Wilhelm Memorial Church. The driver drove for a distance of 50-80 metres, running over people and destroying several market stalls.

– Police described the incident early on Tuesday morning as a “probable terrorist attack”. Chancellor Angela Merkel has said the attack was presumably an act of terrorism.

– Federal prosecutors also say they believe it was a terror attack, carried out by one or several people.

– Shortly after details of the incident were made public, a police spokesperson said it was likely to be a “deliberate” attack. Interior Minister Thomas De Maiziere also said on Monday evening that there were “many things” pointing to an attack.

– One suspect fled and an arrest was made shortly afterwards near the Victory Column in Tiergarten, central Berlin. The detained man denied responsibility for the attack and was later released.

– According to security sources, the arrested suspect was a 23-year-old of Pakistani or Afghan nationality. He is said to have arrived in Germany as a refugee.

– Police and prosecutors said they believed he was not involved in the incident. Various media outlets had reported that details do not match up, such as that the suspect bears no signs of having shot a weapon or having being involved in a struggle.

– The dead man has been confirmed as the haulage driver who was in charge of the truck.

– Twelve people died in the attack, while around a dozen of the 48 injured are in critical condition.

– The Scania truck belonged to a Polish haulage company and was carrying steel beams.

– According to the freight forwarding company, the Polish driver had not been reachable from about 4pm.

– The haulage company owner has seen a picture of the deceased and said he bore clear signs of having been involved in a fight.

– The public prosecutor in Karlsruhe has taken charge of the investigation.

What we don't know

– The most immediate question is whether the incident had terrorist motives or was an act of random violence ('Amoklauf' in German).

– No information has yet been released about the 12 victims.

– It is still unclear whether the attacker or attackers are on the run. If so, they are armed and could present a further danger to the people of Berlin. Police have asked residents to stay alert.

– Information about the events leading up to the alleged attack is contradictory. While police are investigating the apparent theft of the vehicle from a construction site in Poland, the dispatcher at the company said the driver had been travelling from Italy to Berlin.