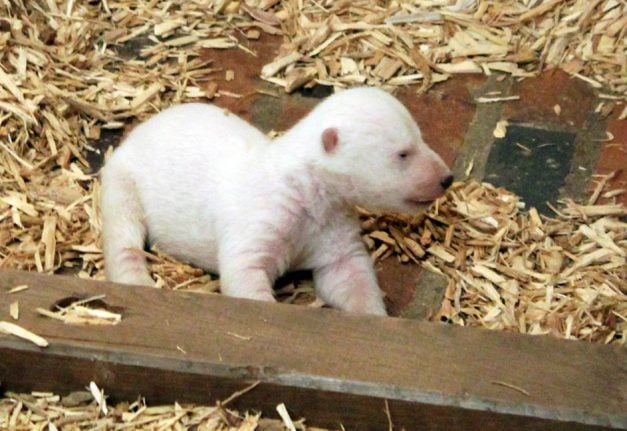 Born on November 3rd to polar bear Tonja, the cute little cub was first presented to the world through pictures published at the start of this month.

Now the zoo has released a three and a half minute video showing the cub's adorable first attempts to stand up.

“It's trying for the first time to push its bum up,” said Christiane Reiss, spokeswoman for the zoo.

In his first effort, the scrawny little cub uses all its strength to try and stand on all four of its pins. But after straining to get its back legs up, it takes a spectacular tumble, squealing as it falls.

But there’s nothing to worry about, the zoo says. The baby is already a master in falling over.

Subsequent attempts all also end in failure as the tiny cub stands up on its front legs without much difficulty, before taking a tumble when it puts its back legs upright.

Mother Tonja, meanwhile, pops her head in now and again to see what her little one is up to.

“That was all a lot of effort. So it’s all the more enjoyable at the end to snuggle up to mum’s warm tummy and recharge its batteries,” the zoo explains on its YouTube channel.

It is still not clear if the snow white cub is a boy or a girl.

“We’re waiting until Tonja shows us that she is being a bit more relaxed,” says Reiss.

That could still take a while, though. Tonja still barely lets the cub out of her sight and protects it around the clock.

The polar bear gave birth to twins at the start of November. Unfortunately one of the pair died, a fact which is not uncommon in the wild.