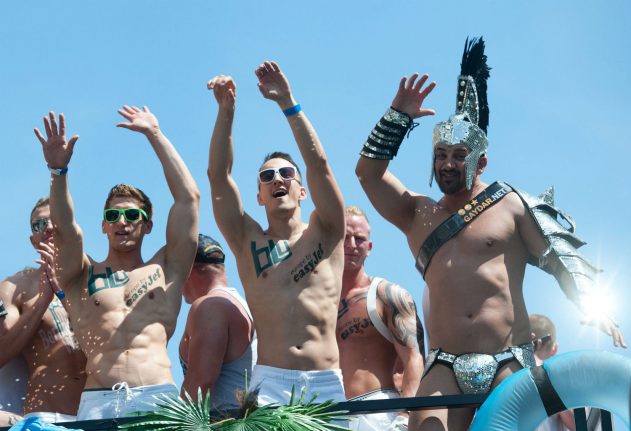 Think these are some homophobic frat boys? Well you're wrong. Photo: DPA.

The survey released by market research firm Ipsos on Wednesday shows that Germans tend to see one another as being much more conservative on touchstone moral questions than they actually are.

The survey, which was conducted across 40 countries, also shows that Germans, like the people of all non-majority Muslim countries surveyed, vastly overestimated the Muslim population of their country.

“We are often most incorrect on factors that are widely discussed in the media, such as the proportion of our population that are Muslims and wealth inequality. We know from previous studies that this is partly because we over-estimate what we worry about,” the report states.

“But in this new study we also show that we’re often unduly pessimistic about how happy people are and our tolerance on controversial issues such as homosexuality, sex before marriage and abortion.”

The results show that Germans believe that only 45 percent of their fellow countrymen would call themselves happy, when in fact previous studies have shown that 84 percent consider themselves happy or very happy.

The same goes for attitudes towards homosexuality and sex before marriage, both of which the vast majority of Germans are fine with, but something many of their fellow citizens don't realize.

Another way in which the German perception differs vastly from reality is estimates of the size of the Muslim population.

Germans reckon one in five of their countrymen are Muslims, when the actual number is one in twenty.

Asked how many Muslims would live in Germany in 2020, respondents thought Muslims would make up around 31 percent of the population – way above the seven percent predicted by demographic experts.

Germany’s perception of itself as a country of renters is also somewhat out of kilter with reality, the survey shows. While 45 percent of Germans live in their own homes, respondents thought that only 28 percent do so.