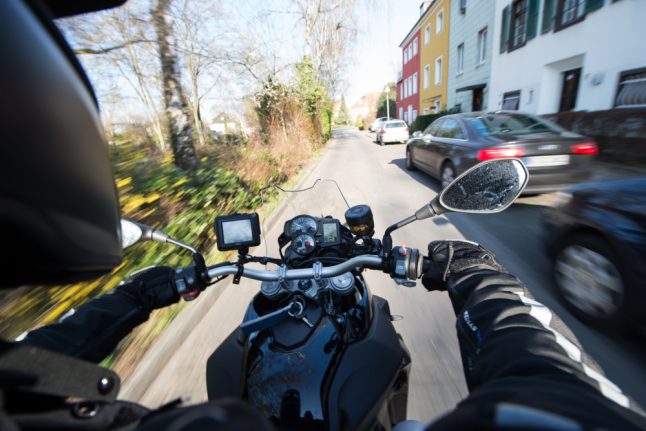 Photo of an unrelated motorcyclist: DPA.

Prosecutors in Bremen say the 24-year-old student hit a 75-year-old pedestrian crossing the street on a red light in June, killing the older man and leaving himself seriously injured.

“If I could, I would do everything possible to undo what happened,” the defendant said in court on Monday, expressing his regrets.
Prosecutors argue that the 24-year-old had given in to “base motives”, and therefore are pushing for a murder conviction.
The 24-year-old’s YouTube channel “Alpi fährt” (Alpi drives) with more than 80,000 subscribers showed videos filmed by a helmet camera of him riding his motorcycle at high speeds. The videos have now been taken down.
He had also filmed the deadly crash, and investigators have been analyzing his other videos depicting risky maneuvers and near misses. Prosecutors say that before hitting the older man, he had also grazed a car with his motorcycle and fled.
The YouTube star had been driving at 100 kilometres per hour, even though the speed limit on the street was 50 kilometres per hour.
Prosecutors argue that the young man knew that at this speed he could not dodge anything in his path, but continued to drive fast anyway.
Fans of Alpi have argued that the older man was also at fault for crossing the street on a red light. But prosecutors argued that this is not relevant to Alpi's guilt, according to the Frankfurter Allgemeine Zeitung.
“As a road user, you must always take into consideration the bad behaviour of others,” said prosecutor Frank Passade. “This is ultimately why there is a speed limit.”
The lawyer for Alpi said that his client had not taken into consideration the risk he posed to others.
“Young drivers tend to underestimate risk,” the defence attorney said.
“Often it goes OK, but sometimes it leads to these tragic incidents that no one wanted to happen.”