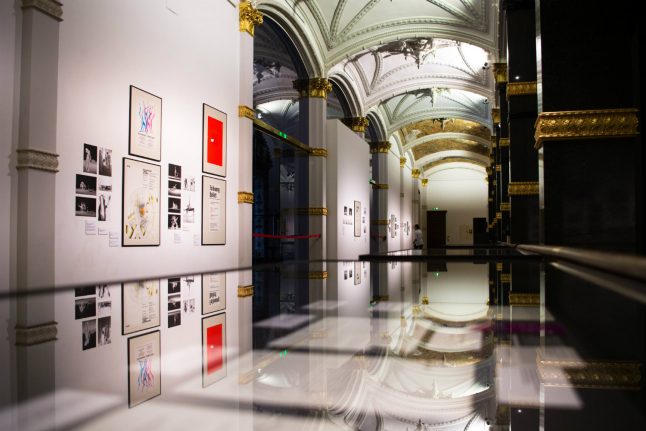 The Pina Bausch exhibition at Martin-Gropius-Bau in Berlin. Photo: Monika Skolimowska/DPA
Beloved of fellow artists and seen as a visionary by her peers in the dance world, Bausch mixed dance and theatre to produce a tumult of emotions, free from traditional constraints, that often divided audiences.
“I'm not interested in how people move, but in what moves them,” she said shortly before her death from cancer.
Now her life's work is being honoured with a Berlin exhibition, “Pina Bausch and the Tanztheater”, where members of the company will offer up to five workshops a day to curious visitors and dance lovers until January 7.
“I couldn't have imagined that you could express yourself without difficult technique, and that it could be so much fun,” said 38-year-old Kerstin Brennscheidt, who had brought her son to rehearse a piece from Bausch's 1982 work “Nelken” (Carnations).
The exhibition recreates the “Lichtburg”, a former cinema in the western industrial city of Wuppertal that Bausch turned into the headquarters of her dance revolution.
“Somehow she's still there in us. I feel her aura around us. It's overpowering,” said Australian Jo Ann Endicott, 66, who became the choreographer's assistant after being one of the star dancers of the Tanztheater.
By the time Bausch passed away her popularity was such that her company had to take to the stage that very same night to satisfy demand.
Things had been very different when she began her work in the 1970s.
“We would begin our shows in packed rooms and end them in half-empty ones,” the Tanztheater's Mechthild Grossmann told feminist magazine Emma in 2010.
“In Bochum, in 1978, we had to stop the show. People were standing and throwing things onto the stage.”
Bausch's personal style was a stark contrast to the classical forms that dominated the world of choreography at the time.
She employed exaggerated expressions and scenery to explore the human condition with a mixture of mischief, sarcasm, joy and despair.
Beyond the choreography's energy, the Tanztheater survivors strive to communicate Bausch's humour and sensitivity to audiences that may not be steeped in the world of modern dance.
There's no doubt that the choreographer made history with her work, and the earth, fields of carnations, waterfalls and animals that inhabited her stages have inspired many who came later.
But only the performers, with their deep bond to the company, can pass on their roles to others – a demanding task for such an intangible art form.
Bausch would set dancers in motion with hints – “full moon”, “desire”, or “at the beginning” – before combining their responses into a whole.
“When you've found what you're looking for, you know it,” she once said.
“Everything had to be reinvented from scratch,” said Grossmann. “Just don't sing like a singer, just don't act like an actor, just don't dance like a dancer.”
Since Bausch's death, her company has stepped up the effort of passing on her works to the younger generation within their own ranks and to other professional dancers.
The choreographer's disciples have communicated their secrets to the Paris Opera Ballet, the Bavarian state ballet and the National English Ballet in recent years.
And Bausch deputy, Endicott, has branched out even further by staging the dance “Kontakthof” with a group of teenagers and over-65s.
Perhaps the greatest challenge for the troupe now is to begin creating something new, rather than just remaining in their founder's shadow as a living monument.
For that, they need a new artistic director – but as Endicott says, “you can't bring a copy of Pina, that's the most ridiculous thing you could do.”
The three pieces offered by the Tanztheater at the end of 2015 met with mixed receptions.
Now, the faithful who Bausch left behind have pinned their hopes on Adolphe Binder, a Romanian without dance training who will have to convince sceptics that she can rekindle the magic in Wuppertal when she takes the reins in May.
Url copied to clipboard!