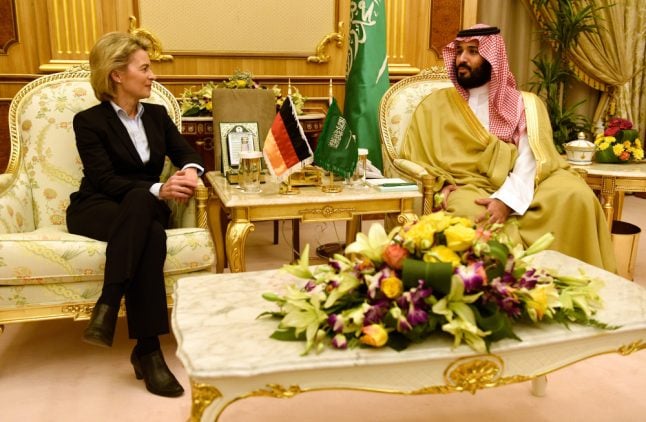 “In addition to that, the visit aims to finalise the talks on enhanced cooperation in the training sector. Beginning from next year, the German Defence College will host several young officers and staff from the Saudi military,” the embassy said in a statement.

But German opposition parties were quick to condemn the training deal.

“Since the Saudi Arabians support Islamists and jihadists, they cannot at the same time also combat these things, and care about stability and peace in the Middle East,” said Die Linke (Left Party) defence expert Alexander Neu.

“It cannot be that this brutal regime is still being courted, German weapons are being delivered, and then the defence minister can also stroll their red carpet without making any strong statements,” Brugger said.

The defence minister, who leaves the kingdom on Friday, belongs to Chancellor Angela Merkel's Christian Democratic Union, which governs in coalition with the Social Democrats (SPD).

Sigmar Gabriel, the SPD chief who is also vice-chancellor, in January warned that Berlin could review military exports to Saudi Arabia.

The caution followed the mass execution in Saudi Arabia of 47 people convicted of terrorism, including Shiite cleric Nimr al-Nimr.

Germany has refrained from selling the Heckler & Koch G36 assault rifle and other offensive military weapons to Saudi Arabia but has shipped millions of euros worth of so-called defensive military gear.

Von der Leyen emphasized on Thursday that during her visit, she was not confronted with demands for more weapons deliveries to Saudi Arabia.

“There is now clarity between our two countries on the topic of restrictive arms exports. And that is good so that there are no false expectations,” she said.

Saudi Arabia, the world's third-biggest defence spender, has been condemned by organizations like Human Rights Watch and Amnesty International for its massive human rights violations, as well as for its air force’s bombardment of Yemen in the fight against Houthi rebels.