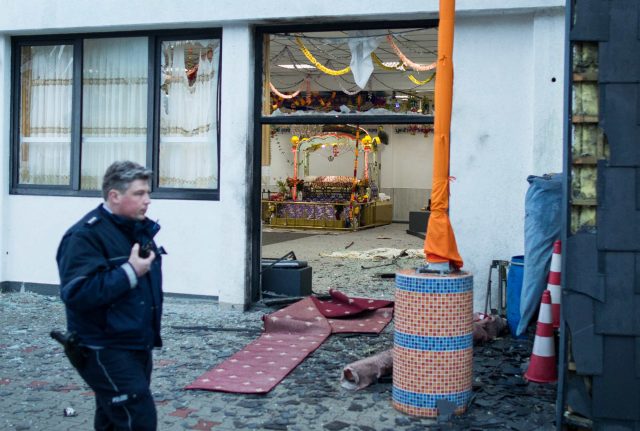 A police officer outside the prayer hall in Essen after the attack. Photo: DPA

The three extremists, all 16 at the time, allegedly set off a home-made bomb in April outside a prayer hall where a Sikh wedding was taking place, also leaving two others with lesser injuries.

The youths, who were born in Germany, had met on social media after being radicalised by ultra-extreme Salafist Muslims, and got together to commit the attack in the western city of Essen.

Prosecutors charge they had sought to kill “non-believers” with a device they had built from a fire extinguisher shell and chemicals ordered from online shopping site Amazon.

At the trial, which is being held at a juvenile court in Essen without media access, all three face charges including attempted murder and causing grievous bodily harm.

Neriman Yaman, mother of one of the accused, the now 17-year-old Yusuf, has described her torment as she watched her young son become radicalised in the book “My Son, the Salafist”.

The Turkish-born author describes how she sought help from mosques and state authorities as her son from age 14 turned to a fundamentalist version of Islam.

She says Yusuf started speaking in verses, watched Arabic-language preachers online, joined a group that handed out Korans on the street, and married a teenage girl wearing a burqa.

Yusuf even joined a de-radicalisation programme run by the German domestic security agency BfV, she recounts, but allegedly went on to commit the attack anyway.

“As parents we were powerless,” she later told journalists.

“The other side was stronger than us … The only comfort in this huge misfortune is that no-one has died.”