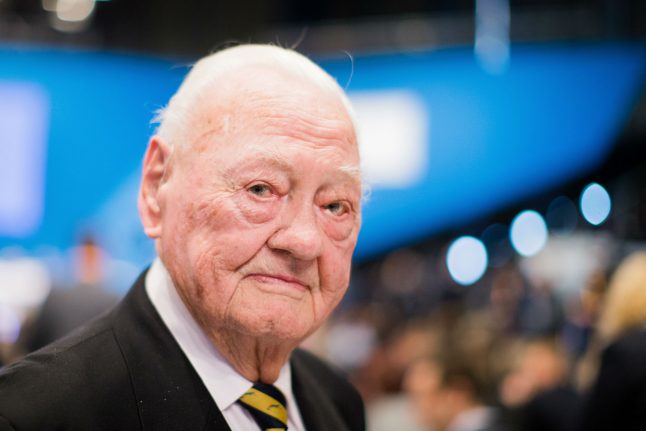 Angela Merkel’s CDU met in Essen on Wednesday for the second day of their party conference. On Tuesday party members re-elected the Chancellor in as their leader for the eighth time.

At the vote was Günter-Helge Strickstrack, one of the co-founders of the party. When he helped set up the party just after the Second World War, Merkel hadn’t been born yet.

He has now attended all 29 party conferences and lived through seven party leaders.

But for him, first party boss Konrad Adenauer was the best of all. Adenauer led the CDU for almost 16 years, 14 of which he served as Germany’s first post-war Chancellor.

Merkel can take heart though – she comes second in the nonagenarian’s list.

“I wouldn’t compare her to Adenauer, but I think she is better than [Helmut] Kohl,” he told DPA on Wednesday.

Kohl is the longest-serving Chancellor in modern German history, having governed the country from 1982 to 1998. He also led the CDU for a quarter century.

He was the force behind German reunification in 1990 and, along with French President Francois Mitterrand, created the European Union through the 1992 Treaty of Maastricht.

But Strickstrack takes issue with the gruff Kohl’s personal style, and particularly his treatment of Merkel, whom he referred to as mein Mädchen (my girl), despite her being a minister in his cabinet.

“Adenauer wouldn’t have called her ‘my girl’, that wasn’t his style,” Strickstrack says.

He also has no doubt that Merkel will still be Chancellor after the autumn elections.

He believes the CDU will join again in a coalition with the Social Democrats (SPD), their current partner, but he says he’d have nothing against a pact with the Greens.

And how has the party changed in the 66 years since it was founded?

“I don’t think there is a big difference. The CDU has always stayed very stable.”