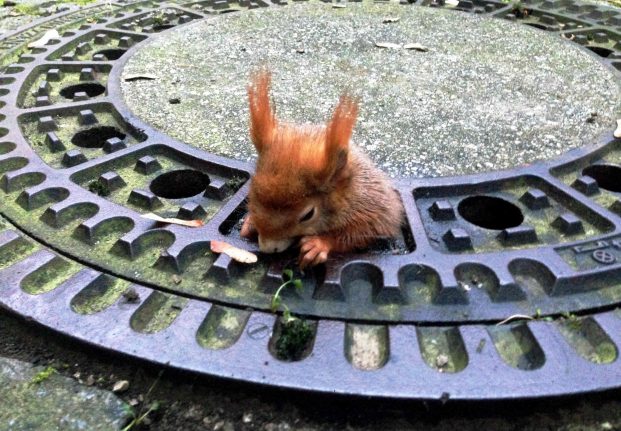 Animal rescue services in Munich were called to the scene on Friday by passersby who found the little rodent, an animal rescue organization reported on Wednesday.

The squirrel was stuck tight and couldn’t move forward or backwards.

Rescuers first greased the little fella up with olive oil, but that failed to do the trick, with his hips bulging out underneath the hole.

By the time a veterinarian arrived at the scene, the situation had become more critical – the squirrel was suffering the first effects of hypothermia.

“He seemed to have no strength. His front claws had been battered by his desperate attempts to free himself,” a member of the animal rescue organization said.

Attempts at pulling him out of the manhole cover from above were then abandoned. Instead, a group of onlookers who had gathered at the scene helped volunteers to lift the iron cover out of the pavement.

Once the heavy cover was moved out, the vet was able to pull the animal bum-first out of the bottom.

He was then taken to a care centre where he has been named “Olivio” due to the fact he arrived dripping in olive oil.

“He almost died,” Sabine Gallenberger from the animal rescue organization said. “Now he is eating a lot and sleeps all the time.”