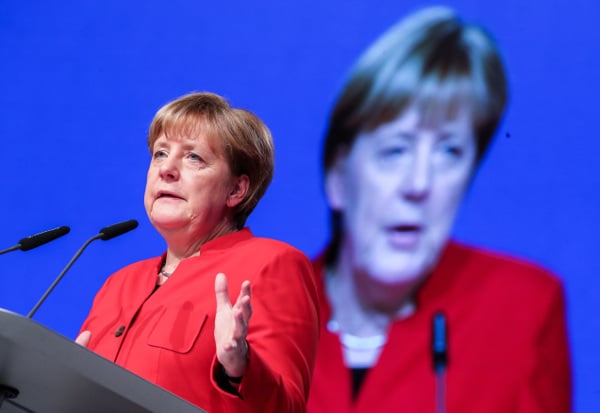 “For us that means: show your face, therefore the full-body veil is not appropriate, it should be banned,” Merkel told the annual congress of her Christian Democratic Union (CDU) in Essen.

Making her pitch to be renominated as CDU candidate for national elections in autumn, it was the strongest opposition the Chancellor had yet voiced to the conservative Muslim clothing being worn in public.

Her party mates have proposed banning the burka in places like courts and police stations, but up until now Merkel had only voiced hesitant statements on the subject.
In August, she said that while she believed the burqa made it difficult for women in Germany to integrate, she was more reluctant to suggest a ban.
“From my point of view, a completely covered woman has almost no chance of integrating herself in Germany,” Merkel told Redaktionsnetzwerk Deutschland at the time, before adding that it was “a question of finding the right political and legal balance.”
But in September she said she was against a general burqa ban, citing religious freedom.
She said then that while the government was considering rules about having a ban in certain public places, “diversity is the logical consequence of freedom.”
Creating legal constraints on the type of clothes Muslim women can wear has been a theme of European political debate through much of 2016, spurred by Islamist terror attacks in several countries.
A ban on “burqini” swimwear divided France and indeed the world over the summer, and had numerous supporters in high places – including Manuel Valls, who just on Monday announced he was resigning as PM to chase the presidency.
The ban in France was eventually overturned by a court after it had been rolled out in dozens of coastal towns.
Just last week, the Netherlands moved closer to banning the burqa in public places when the parliament voted in favour of the measure.
Refugee influx 'must never be repeated'
Merkel also had bullish words on the refugee crisis, saying “a situation like the one seen in the summer of 2015 should and may not be repeated. That was and remains my stated political goal.”

There was considerable anticipation of how delegates at the conference would receive Merkel’s comments on the refugee influx, which had created controversy within the party ranks.

Merkel also defended how the government had acted at the time, saying refugees “were taken in as individual people and not as an anonymous mass.”

Critics of the open-door policy, among others the Alternative for Germany (AfD), have often repeated the accusation that Germany took in immigrants en masse without checking who they were.

Without mentioning the upstart AfD by name, Merkel said Germany must remain “sceptical about easy answers”.

“The world is not black and white,” she said. “Rarely is it the easy answers that bring progress to our country.”

Merkel also received applause on Tuesday when she thanked volunteers who had given up their time to help the 890,000 asylum seekers who arrived in the country in 2015.
With AFP