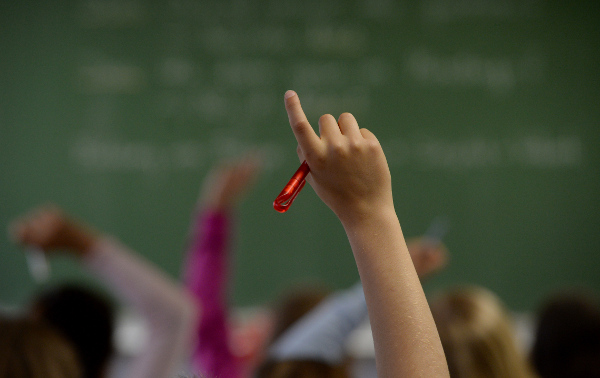 Organisation for Economic Co-operation and Development (OECD) published its highly anticipated PISA report for 2015, comparing the aptitudes of around 540,000 15-year-olds from 72 different countries in the fields of science, reading and mathematics.

Overall, German students performed above the OECD average in all three areas tested. Germany also had a higher share of top performers – those who scored the top levels or 5 or 6 in at least one subject – than the OECD average, as well as a smaller share of low achievers – those who scored below level 2 – than the OECD average.
The ranking placed Germany about on par with the United Kingdom, and below Slovenia, Finland and Estonia, which performed the best of the European countries. There, less than 5 percent of students were low performers in all three subjects, whereas in Germany this proportion was more than double at nearly one in ten students.
German students performed best in science and reading, but science scores saw a drop since the last PISA report in 2012 by 15 points out of a possible 1,000, and math scores dropped from 514 to 506. Reading scores increased by one point.
In the category of science, 11 percent of German students were top performers, which was 3 percentage points higher than the OECD average.
Rich-poor achievement gap
Germany has more of a gap between students based on their socioeconomic backgrounds than other countries on average: there was a 16 percent variation in student performance based on socioeconomic status, compared to the OECD average of 13 percent.
Still, this gap did shrink by 4 percentage points since 2006.
“As in the majority of OECD countries, a more socio-economically advantaged student in Germany scores more than 30 points higher in science (the equivalent of one year of schooling), on average, than a disadvantaged student,” the report explained, noting that this point difference was 42 in Germany.
In contrast, Canada, Estonia, Finland and Japan all had 10 percent variation or less between advantaged and disadvantaged students.
“Germany’s education system is less equitable than the average across OECD countries,” the report added. “However, equity has improved in Germany since 2006. Students’ socioeconomic status became a less reliable predictor of achievement.”
The gender gap
Germany showed a higher than average gap in performance based on gender than other countries in certain areas. In science, German boys scored better than girls by an average of 10 points, which is above the OECD average of 4. And though the gender gap widened by 3 percentage points in Germany between 2006 and 2015, the OECD said this was not a significant change.
“In science, gender differences remain entrenched. Boys are more likely to be poor performers, but they are also much more likely to be top performers in science. Finland is the only country in which girls are more likely to be top performers than boys in science,” said OECD secretary general Angel Gurria in a statement introducing the report.
In mathematics, German boys scored higher than girls on average by 17 points – which was wider than average – and the OECD noted that this gap has not changed much since 2003.
But in reading, girls outperformed boys by an average of 21 points, compared to an OECD average of 27 points. This gender gap also narrowed by 19 points between 2009 and 2015.
There was also a “pronounced” difference in what boys and girls wanted to pursue as future careers.
German students in general were less enthusiastic about going down a scientific job path: just one in seven (15 percent) German teens said they wanted to pursue a scientific occupation, compared to one in four as the OECD average, about one in three in the UK and 38 percent in the US.
But while 17.4 percent of German boys said they would go into the sciences, just 13.2 percent of girls said the same.
“The story here is not about abilities. It’s about different interests, confidence levels and career expectations… Data from previous PISA assessments show how these gender differences are reinforced by the attitudes and inherent biases of parents, teachers and even textbooks,” Gurria said.
“Parents, teachers, policymakers and opinion leaders should actively challenge gender stereotypes about science-related activities and occupations – e.g. ‘computer science is for boys’, ‘biology is for girls’ – and increase student awareness of the range of career opportunities.
“Our objective is clear: to ensure every child, whatever their background, benefits from a quality education.”