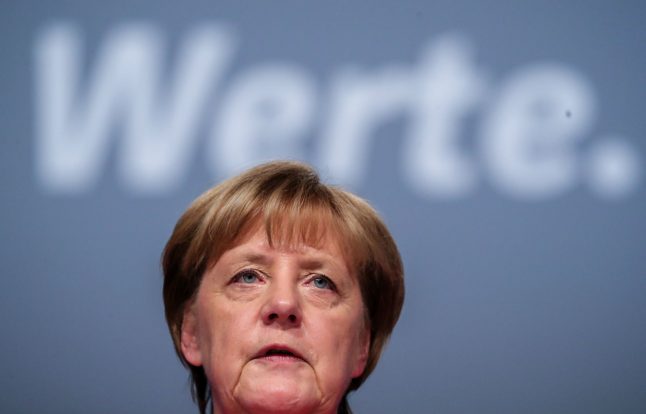 When she addressed around 1,000 party delegates on Tuesday afternoon there was little doubt would be re-elected as party leader. In the end though, she won her second lowest vote of approval in nine internal party elections, even if 89.5 percent sounds convincing.

The result shows how Merkel will fight the election from a strange, almost uniquely German position of simultaneous strength and weakness.

Even at this stage it seems pretty clear that the CDU will emerge as the largest party after the autumn vote. They are polling in the mid to low thirties, far ahead of the Social Democrats who are stagnating at a historic low of around 20 percent.

Her own personal approval rating meant that CDU delegates had little alternative but to vote for the woman who has dominated their party for almost 17 years.

Barring a major catastrophe for which Merkel is likely to be held personally accountable – and the only thing one can think of here is a major terrorist attack carried out by people who arrived as refugees – the 62-year-old is about as safe a bet as there is in western politics at the moment.

Yet at the same time, nothing has caused such division within her conservative union during her tenure as the policies which led to the arrival of almost one million asylum seekers last year. The CSU, the CDU's Bavarian sister party, fought open war against their own government for months before finally backing Merkel in the late autumn.

The policy has also led to embarrassments in state elections in traditional strongholds in the east of the country, where the far-right Alternative for Germany (AfD) has grabbed large sections of the CDU vote.

This uncomfortable duality of strength and weakness meant that in her speech – which is likely to be the playbook for her election campaign – she was strident in some areas and made remarkable concessions in others.

The burqa ban: she needs to please her right wing

It was against this background that Merkel gave the speech that is likely to be the playbook for her election campaign. So it was little surprise that her speech focused on refugees and integration.

Despite in September saying that she though that religious freedom meant that religious face veils could not be banned, Merkel on Tuesday said: the full-body veil is not appropriate, it should be banned.”

In backtracking the Chancellor was making a clear concession to the CSU who repeatedly called for the ban of burqas in public spaces during the summer.

After Bavaria was hit by two Isis-linked terror attacks in July, CSU leaders came up with a package of arch conservative reforms they wanted pushed through on integration and asylum laws.

While Merkel refused to budge on their demand for an upper limit on the number of refugees Germany takes in, it appears she has dropped her opposition on this touch stone issue.

She has changed her tune on refugees

While Merkel may repeat that she refuses to put an upper limit on refugees, she made another clear concession to party critics in her speech, saying that the refugee influx “could, should, and would not happen again.”

The words were in reality the very delayed announcement of a policy which has been in place since the start of 2016 and has led to a huge drop in the number of refugee arrivals.

A controversial deal with Turkey in which the EU offered Ankara billions of euros to stop refugees crossing over to Greece was one cornerstone. Another was the introduction of a two-year wait period for the families of many refugees before they are allowed to join them in Germany, a policy which critics describe as “inhumane.”

She's not afraid to criticize the voters

But Merkel still reserved surprisingly harsh criticism for the German public accusing them of having misplaced priorities, showing she still feels confident enough in her authority to ruffle a few feathers.

“If a free trade treaty with the USA brings hundreds of thousands of Germans onto the street but the horrible bombing of Aleppo doesn't result in any public protest the there is something wrong with political standards these days,” she said.
She was referring to protests seen through Germany in the autumn against the TTIP free trade pact. These protests were attended by Germans from the populist left and right wings of the German public and were decisive in stalling the pact until it was eventually killed off by the election victory of Donald Trump in the USA.

She has drawn the battle lines with the far-right

She also wasn't in the mood for conciliation with supporters of the far-right Alternative for Germany and the anti-Islam Pegida movement.
“Who the people is, that is always decided by everyone here, we all have our say, not a small number, no matter how loud they might be,” she said.
Demonstrators at Pegida rallies often cry “wir sind das Volk” we are the people – Merkel's comments were a clear rebuke to this movement.
And her words got harsher still: “Sometimes I have the feeling that people who have always lived in Germany need an urgent course in integration,” she said in reference to a rise in online xenophobia.
“Sometimes people loose all inhibitions and express themselves in a way I could never have expected. I say – we say – that's not on.”