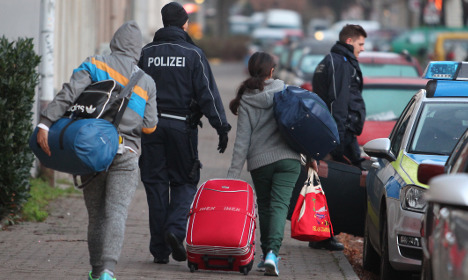 Rejected asylum seekers in Leipzig being taken to the airport. Photo: DPA.

“Whoever is not fit to travel can also not be deported,” the Christian Democratic Union (CDU) politician and interior minister of Baden-Württemberg Thomas Strobl told Die Welt in an interview published on Monday.

“But we must be honest: If someone still manages to make the arduous journey over the Mediterranean or through the Balkan route, despite an illness, and then we must determine that they have no chance to be able to stay, one must at least consider if it is also possible that they could brought back on an airplane within a few hours.”
“One cannot give hundreds of thousands of people departure orders, but then not consistently implement them. That undermines the sustainability and substance of trust in the state.”
Strobl had presented a position paper about a week ago in which he also called for a tougher asylum policy, including cutting social benefits and building a repatriation centre in Egypt. The plan stated that those who are ill before they come to Germany could also be deported if their asylum applications are rejected.
He argued in the interview on Monday that his plan still fell in line with Merkel’s policies of having “open borders and hearts”.
“We have an open heart for those who need protection… We are in solidarity with anyone who is suffering. But it cannot be that immigrants can creep through the back door and massively abuse our asylum system.
“I can understand if people want to stay with us because they see better economic prospects. But asylum laws are definitely not the solution.”
Strobl’s plan was criticized last week after it was presented.
“The CDU is also now using populist slogans,” said Social Democrat (SPD) general secretary Katarina Barley to the Passauer Neue Presse.
And Strobl’s fellow CDU party mate Klaus Bouillon said the plan would “by no means” be on the official agenda of a conference of German interior ministers last week.
Bouillon added that there are “clear legal guidelines” for handling sick asylum seekers.
A report in September by Bild showed that more than 500,000 rejected asylum seekers were still living in Germany. Many had received other permits to stay aside from asylum status, or were considered “tolerated” if they, for example, lacked travel documents.
SEE ALSO: How rejected asylum seekers can still be allowed to stay
International consulting firm McKinsey said in a report to the German government, seen by Die Welt on Sunday, that the country needed a coordinated deportation system with states.
“For this purpose, appropriate deportation and custody centres should be established,” the report notes.
McKinsey also recommends stricter regulations for tolerated immigrants. Those who are sick or have no travel documents and thus cannot be deported should only receive food and clothing instead of money, the report recommends.