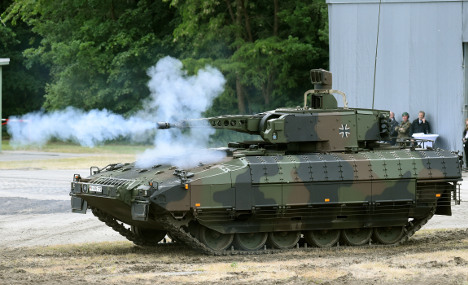 A Puma tank used by the German military. Photo: DPA.

The world’s 100 biggest weapons producers and military service firms sold a total of $370.7 billion (€350 billion) in products last year – a 0.6 percent decrease on the year before, according to a report on Monday by Stockholm International Peace Research Institute (SIPRI).

This was the fifth consecutive year in which such sales have dropped.
But the three German companies analyzed increased their sales by 7.4 percent in 2015 to $5.6 billion.
The report noted that this increase was slightly less than that seen in 2014, when sales in Germany rose by 9.4 percent. And the increase this year in German sales was largely due to military technology firm Rheinmetall’s own increase of 15.3 percent in sales.
And though sales by companies based in the United States declined by 2.9 percent, these firms still dominate the top 100 list in terms of total sales, reaching $209.7 billion, according to the report..
US firms made up 56.6 percent of the total amount of sales by the top 100 firms, while German sales made up 1.5 percent. After the US, the UK was the second largest seller with 10.6 percent of total global sales.
South Korea expanded its sales the most in comparison to previous years, with a spike of 31.7 percent, reaching total sales of $7.7 billion.
“All South Korean companies show higher arms sales in 2015, reflecting their growing capacity to meet the South Korean Ministry of Defense’s demand and their ongoing success in the international market,” said SIPRI senior researcher Siemon Wezeman in a statement.
Across western Europe, companies overall increased sales by 6.6 percent to a combined total of $95.7 billion.
“After the Second World War, western Europe armed itself again, particularly with the founding of NATO,” SIPRI programme director Aude Fleurant told Deutsche Welle.
“During the Cold War, France, England, Italy, Spain and Germany established weapons companies so that they could acquire equipment independently. This attitude has been maintained, despite the dramatically changed situation.”